This year’s renewal of the G3 contest will see William Hill renew its association with the race having previously backed the prize in 2019.

The bookmaker will also sponsor four other races on the card including the G2 Rendlesham Hurdle and will also become the title sponsor of the November meeting at Aintree, along with repeating their sponsorship from 2020 in the G3 Becher Chase at the Merseyside track.

“We are delighted to once again be associated with the Grand National Trial day at Haydock. In the past the race has produced some fantastic winners and I am sure this year’s renewal will give us some pointers for what is the biggest race in the calendar.”

The 3m 4 1/2f Grand National Trial has been won by some of the sport’s most famous staying chasers, including three-times Grand National winner Red Rum in 1975, the 1992 Grand National hero Party Politics, who lifted the prize in 1993, and subsequent Cheltenham Gold Cup winners Cool Ground and Master Oats, who won the 1992 and 1994 renewals respectively, the latter having been staged at Kempton Park.

Seven Barrows trainer Nicky Henderson is yet to win the race, but in G1 winning nine year-old Santini he has a top class prospect that could change that statistic.

He said: “The plan is to run at Cheltenham on Saturday but if it is very testing ground we would think again as it’s not the right time to be doing that. There is only the Denman Chase after this weekend and the plan is to run Champ there, but I am not saying they both can’t go there.

“Everything is just a bit up in the air with the ground like it is so it is hard to make plans. I’m not saying he would jump into a Grand National by having an entry in this race I just want to make sure all avenues are covered.

“It is unlikely that he runs there as it probably comes a bit too close to Cheltenham but the options for him are so limited. Haydock is unlikely to come up with better ground at this time of year but you never know - we will just have to see what happens.

“He would easily stay the trip around Haydock that’s for sure.” 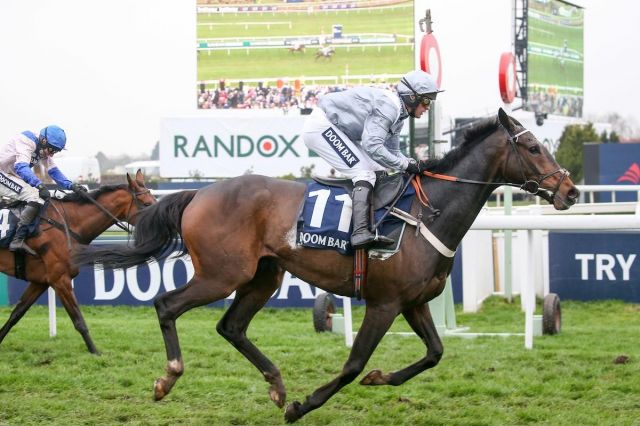 Henderson has another entry in Pym, who was last sighted finishing fifth in the Listed Rehearsal Chase at Newcastle, having previously made a winning return at the same level in the Future Stars Intermediate Chase at Sandown Park in November.

Henderson added: “Pym is another that really wants decent ground and he has been having a bit of break during the winter. The race at Newcastle probably came a bit quick for him a bit like how the race at Sandown did for If The Cap Fits so we are just freshening him up.

“He does want decent ground but at the same time he is a hard horse to place. He would get the trip at Haydock no problem though as he is a thorough stayer.”

Another eye-catching entry is Bristol de Mai, who is one of three put forward by trainer Nigel Twiston-Davies alongside Ballyoptic and Cogry.

Nicholls said: “I’ve entered Truckers Lodge and Yala Enki in the race as both horses want to be in there. We have not decided a plan yet whether to run them in it or not but that will be made in time.

“I have given Yala Enki an entry in the Cotswold Chase at Cheltenham on Saturday, though it is only a tentative entry and he would only run if they had lots of heavy rain.

“Yala Enki was third in the race last year and he will probably end up carrying 11st 12lbs in it but we will have a look at it for him. Truckers Lodge didn’t run in the race last year as he had a little injury and we then went fresh to the Midlands National. I will chat to the owners and see what they want to do.

“It took him a while to get over the race the other day but he is back on form now. If you look at his Chepstow run with Yala Enki he was 16lb higher than in the race the year before. He was put up too much for winning the Midlands National and that is what has stopped him off that mark so he still ran very well.

"Truckers Lodge put everything into it at Chepstow and he just takes a bit more time to get over races than Yala Enki.”

Charlie Longsdon expects the step back up in trip to be more suitable for his sole entry, Just Your Type, who finished third at the track over three miles last Saturday, 23 January 23, behind Royale Pagaille in the G2 Peter Marsh Limited Handicap Chase.

Longsdon said: “Just Your Type will either go for the Grand National Trial or the Eider Chase. He ran a cracking race the other day. The trip was too short for him as three miles is not his cup of tea, and if you took the winner out, who is getting all the hype he deserves, then he would have probably won.

“I know he finished third but we probably paid the penalty for trying to chase the winner early doors and if we just sat quietly for longer we wouldn’t have lost second place.”

Nicky Martin hopes her stable star The Two Amigos can better his fourth place finish in the race from 12 months ago by going one better than in the Welsh Grand National at Chepstow.

Martin said: “He is such a superstar. Considering he is only 15”2 you would not think he would be a chaser but he jumps so well on the whole and the plan is to go to Haydock.

“He doesn’t always finish his races well when he comes off the bridle and I was worried he would get caught for second in the Welsh Grand National, but on what was better ground than it was described at Chepstow he stayed on well.

“He is only 2lb higher than when he finished fourth in the race last year and the horse is in better form than 12 months ago. He is very fresh again after running over nearly four miles at Chepstow two and a half weeks ago. He deserves to win a race like this as he has been knocking on the door for a while.” 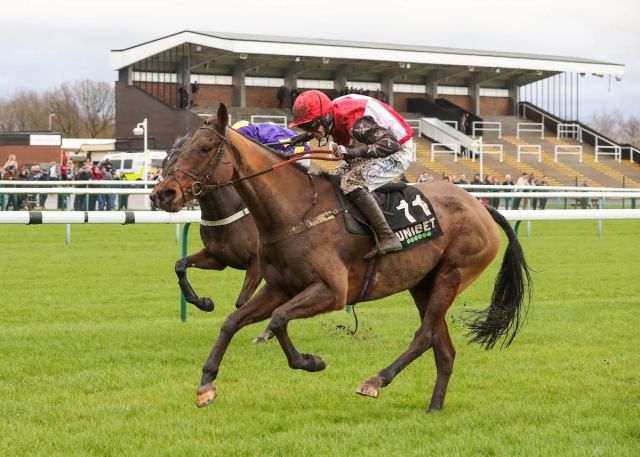 Haydock Park is a dual-purpose racecourse and a leading conference centre in the north west of England. More information is available at https://www.thejockeyclub.co.uk/haydock/ and through: Twitter @haydockraces Facebook www.facebook.com/HPRacing Instagram @haydockparkracecourse