“My rides are just ok but what gets me a bit excited is the gates, I have good gates in all of the races which plays a big role in this type of competition,” Moreira said.

“I wouldn’t have my name in the top three - probably in the top four but I think we can bring a home a winner,” Moreira said.

A four-time champion of Hong Kong, Joao Moreira won the 2012 LONGINES IJC and is no stranger to success abroad in jockeys’ challenges having claimed the 2015 World All-Star Jockeys in Japan.

“Classic Posh has a good chance because he was very unlucky his last start, now he has a good gate but in all of the races, the Club has done a good job to select the right horses, it’s very even – anything can win!” he said.

Classic Posh is a two-time winner from his last six starts and boasts three wins at Happy Valley over 1200m for trainer David Hall.

Telecom Rocket – Moreira’s second mount – is yet to place this term from four outings, although he is a two-time winner in Hong Kong – once with Moreira up in December of 2019.

“Telecom Rocket, he’s in Class 4, he’s up to this level and he has a good gate – I have three rides from gate two and from one from gate five, so that’s pretty good,” the Brazilian said.

Moreira singled out Glory Vase – for Japan – as the mount he is most looking forward to, especially after the pair reigned supreme when romping home in the 2019 LONGINES Hong Kong Vase by over three lengths.

“He would be my best ride of the four Group 1 races, I would say - his last win was outstanding, so he just has to produce his best to be hard to beat,” Moreira said.

Since that win, Glory Vase returned to finish second in the 2021 G1 FWD QEII Cup (2000m), while under an injury cloud to place behind Loves Only You.

Since that run in April, the son of Deep Impact finished third at G2 level over 2200m at Nakayama. Hishi Iguazu will have his second taste at the top-level in Sunday’s LONGINES Hong Kong Cup after finishing fifth last start in the G1 Tenno Sho Autumn (2000m) at Tokyo behind Efforia.

“He’s been running against very good horses, anything that finished ahead of him last start, if they had come over for this weekend’s race they would be hard to beat.

“So, I have a bit of hope with this horse, it’s a strong race but I believe that he’s going to be right there,” Moreira said. 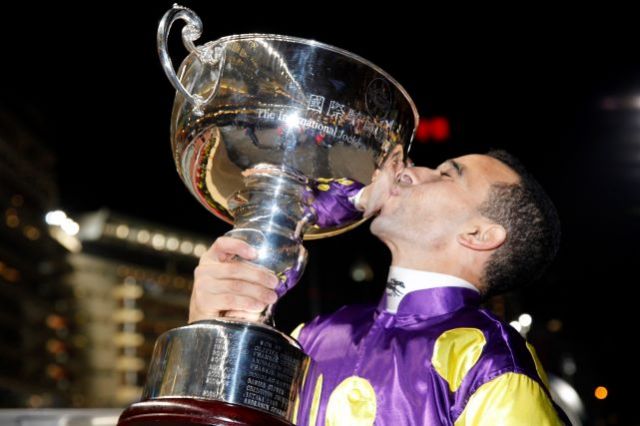