Ummalnar (William Haggas/Tom Marquand) has a 3lb penalty to contend with following a career best on her latest start.

The six-year-old produced the most impressive Fast-Track Qualifier performance of the season so far when slamming Surrounding by six lengths in the Listed Irish Stallion Farms EBF Cooley Fillies & Mares Stakes at Dundalk on November 13.

“Ummalnar has been fine since her win in Ireland.

“This race fits in well in preparation for Dubai at the end of the month. She is heading out there for the Cape Verdi on January 28.

“Beyond that, I would say it is very possible that she will come back here to run on the All-Weather. “We will keep all our options open, but it’s definitely Newcastle tomorrow and then Dubai on the 28th.” 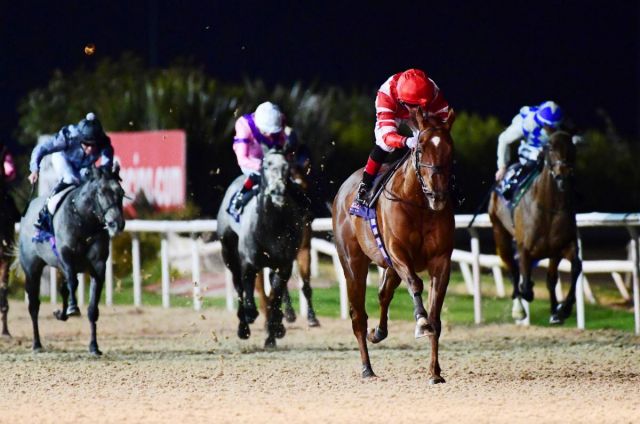 Former Godolphin runner Vintager (Simon & Ed Crisford/Jack Mitchell) made a promising start for his current connections when landing a mile conditions race at Chantilly on December 8, his first start for 430 days.

The six-year-old enjoyed some big days for Charlie Appleby in 2019, winning a G3 contest at Chantilly and the G2 86th Oettingen-Rennen in Germany.

The five runners also include Count Of Amazonia (Ben Curtis), who is unbeaten in two starts since joining Marco Botti from Richard Hannon.

Both of those successes have come on the All-Weather at Chelmsford City, most recently in a class two handicap on December 10.

Born To Be Alive (Karl Burke/Clifford Lee), twice a runner-up at Listed level, returned from a 896-day absence to finish second in an extended nine-furlong handicap at Wolverhampton on December 26.

Trainer Karl Burke said today: “Born To Be Alive is obviously coming back after an injury. He ran well at Wolverhampton albeit in a messy race after Mick Appleby’s horse [Big Country] came down.

“He came to win his race and just blew up really, so he will definitely come on fitness wise, and we have always felt that he is better over a mile rather than a bit further.

“It looks a tough race, but he deserves a crack at it.” G3 Sovereign Stakes fourth Bless Him (David Simcock/Jamie Spencer), successful in the Britannia Handicap at Royal Ascot in 2017, completes the field.

Burke hoping Exalted Angel can turn tables on Venturous A starting berth in the Betway All-Weather Sprint Championship is up for grabs in the Betway Conditions Stakes (5.00pm) at Newcastle tomorrow, Tuesday, January 12, the sole five-furlong Fast-Track Qualifier of the championships.

Venturous (David Barron/Tom Marquand) had a strong end to the 2020 campaign, winning five-furlong handicaps at Doncaster, Newcastle and latterly Wolverhampton on December 18.

Exalted Angel (Karl Burke/Clifford Lee) finished second to Venturous at Newcastle and third behind the same rival at Wolverhampton having forfeited lengths at the start on each occasion.

The progressive five-year-old had won twice on the Fibresand at Southwell earlier in the year. Trainer Karl Burke said today:

“Exalted Angel is in great order and I am looking forward to seeing him run.

“He has been a bit tardy out of the stalls on his last couple of starts, which has left him with ground to make up.

I think he would have definitely beaten Venturous at Newcastle had he jumped on terms.

“If he jumps reasonably well tomorrow and is able to track the leaders, he will run a big race. He is a nice horse on the upgrade, I think.”

Veteran All-Weather campaigner Royal Birth (Stuart Williams/Jason Hart) was back to his best over the festive period, beating Ornate (David Griffiths/Phil Dennis) at Lingfield Park on December 22 and following up at the same track on January 4.

The unknown quantity in the field is Bomb Proof (James Fanshawe/PJ McDonald), who has not raced since finishing seventh on his handicap debut at Ascot in July.

He had looked a horse of considerable promise prior to that, winning his first two starts at York and Beverley

Tawny Port (Stuart Williams/Ben Curtis) drops back to five furlongs for the first time in over a year.

He registered three victories over the minimum distance last winter but has raced exclusively over six furlongs since then.

The seven runners are completed by Lomu (David Loughnane/Paul Mulrennan), a winner over the course and distance on his penultimate start.