Al Zaraqaan extended his unbeaten record on the All-Weather to four with an authoritative display in the 10-furlong Betway Conditions Stakes at Newcastle this afternoon, a Fast-Track Qualifier for the £200,000 Betway Easter Classic.

Previously trained by William Haggas, the former Shadwell runner was making his first appearance for Archie Watson since being sold at the sales in October.

Danny Tudhope kept things simple from the stalls and sent Al Zaraqaan straight into the lead, with Halimi and Sir Chauvelin following in Indian file.

The 4/6 favourite upped the ante turning into the straight and was never seriously threatened, pulling away from Halimi inside the final furlong to win by almost four lengths.

This was a second Fast-Track Qualifier win at Newcastle this year for Watson and Al Zaraqaan’s owners Hambleton Racing, who were also successful with Tempus in a mile qualifier on January 2.

Watson said: “That was a good performance from Al Zaraqaan, making his own running into a strong headwind in the straight and winning well. Danny was delighted with him.

“We will see how he comes out of the race but the Winter Derby Trial and Winter Derby itself would be nice options, I’m sure.”

Tudhope said: “Al Zaraqaan has good form on the All-Weather and has shown that again today.

“I spoke to Hollie [Doyle] and Archie beforehand and they both said, ‘whatever you do, don’t turn it into a sprint’. He stays well and has form over further than this.

“We made it a good test and there is a strong headwind in the straight, which makes it hard work, but he did it nicely.

“He is a big strapping horse and hopefully there is a bit more to come. Archie knows what he is doing and I’m sure he has a plan.” 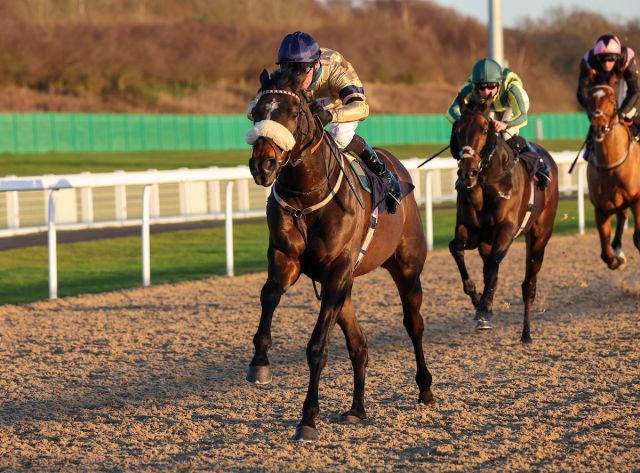 Finals Day will take place at Newcastle for the first time while its previous home Lingfield Park will now stage the All-Weather Vase fixture for horses not rated high enough to run on Finals Day.

There are two ways for horses to qualify for one of the finals on All-Weather Championships Finals Day at Newcastle:

* A horse can win a 'Fast-Track Qualifier' race which will ensure a FREE and GUARANTEED place in the corresponding final on Good Friday. There are four Fast-Track Qualifiers in each of the six championship categories hosted at racecourses in Great Britain, Ireland and France. If a filly wins any of the Fast-Track Qualifier races for either the Sprint or the Mile categories, the filly will be qualified for the final of that specific category, or for the Fillies and Mares Final.

For details of the 24 Fast-Track Qualifiers, please click here.

For more information on the All-Weather Championships, please visit: www.awchampionships.co.uk