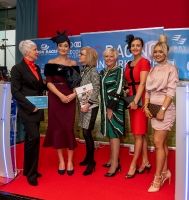 This had been scheduled to take place at Doncaster in October, but unfortunately was rained off twice.

As a result, the winner of the best dressed lady competition at each racecourse was invited to the lunch, along with the sponsors, who judged the final on the day.

The winner was Lisa Longden representing Ripon racecourse. She won a diamond ring worth £2,000 from lovevintagediamonds, a two-night stay in a spa suite, for two adults at the Best Western Mount Pleasant Hotel and a £500 voucher for ladies’ boutique Incognito, in Bawtry.

Head judge, Helen McIlroy said, “It was a tough decision as all the ladies had made a fantastic effort, but we loved how Lisa’s effort went together. It was a very classic look which really worked.”

It was a first for both the winner of the leading jump trainer and jockey in Yorkshire for the 2018/19 jump season.

Catterick based Philip Kirby took the honours as leading jump trainer, while Barbara Butterworth picked up the trophy on behalf of Sean Quinlan, who was riding at Newcastle, and took the top spot among the jockeys.

Wendy Hoggard, from White Rose Saddlery, made the presentation for the Go Racing In Yorkshire Future Stars Apprentice Series, which had a back-to-back winner for the first time. Kieran Schofield who won this award in 2018 fought his way to the top of the table with two winners and managed to stay at the top throughout the season.

The leading flat trainer award was fiercely competitive throughout the season, but it was Richard Fahey who came out on top with 73 wins.

Danny Tudhope took the flat jockeys equivalent with an amazing 83 wins in the White Rose county to top off a fantastic year for the Thirsk based jockey. Tudhope was also presented with the ‘Cock O’ The North’ title from Great British Racing’s Fred Motely.

The Cock O’ The North is presented to the jockey with the most wins at Northern racecourses and it is the third successive year he has won this.

The Yorkshire Horse of the Year Award is chosen by journalists and this year went the way of Definitly Red, owned by Phil and Julie Martin and trained by Brian Ellison. The consistent chestnut gelding has been running at the top level and was the first Yorkshire trained winner of Wetherby’s Charlie Hall Chase in over thirty years. 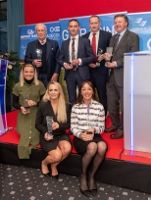 A new category for 2019 was the Milestone Achievement Award and these were presented by Managing Director of Pontefract Racecourse, Norman Gundill, to Brian Hughes, Danny Tudhope and Paul Mulrennan for each riding the 1000th winner of their career, Joe Fanning for riding his 2,500th winner, Mark Johnston for breaking the number of winners trained in a year, Tim Easterby for training his 2,000th winner and John Sanderson for 50 years as clerk of the course.

John Sexton, Chairman of Go Racing In Yorkshire said, “It is wonderful to be able to celebrate the successes and achievements of racing in Yorkshire and we look forward to more of the same in 2020.”

Racing continues in Yorkshire this weekend at Doncaster on Friday 13th and Saturday 14th December, before a busy period covering all three of Yorkshire’s jump courses from 26th December.