A maximum field of 16 will contest the Glenfarclas Cross Country Handicap Chase (3.05pm), the second of three cross country chases at Cheltenham through the season. Staged over three and three-quarter miles, the £35,000 contest is the final leg of the Crystal Cup, an 11-race series that features Europe's premier cross country chases.

The 16 runners include representatives from France and Ireland, as well as the UK. Heading the French-trained challenge is the exciting Easysland (David Cottin/Jonathan Plouganou), winner of his last four starts. Easysland's most recent success came when taking a leg of the Crystal Cup at Compiegne on 11 November.

The five-year-old will be joined by his stable companion Amazing Comedy (James Reveley), who has made three previous appearances at Cheltenham.

The six-year-old will be making his first appearance for Quinton tomorrow and is also running in a cross country contest for the first time.

Previously trained by Francois Nicolle, Decret is a three-time chase winner, most recently at Auteuil in June, 2018.

Quinton, who is based at Dragey-Ronthon in Normandy, said today: "We bought a share in Decret specially to bring him here to run at Cheltenham. "I love coming here, and it's a great challenge.

This is my sixth year that I have made the journey over. "Decret joined me a month and a half ago. He has class as he has won at Auteuil.

He jumps well and should enjoy going over cross-country fences for the first time."

The fourth French-trained runner is Azrou d'Ex (Augustin de Boisbrunet/David Noonan), who landed a cross country chase on his latest appearance at Fontainebleau on 26 November.

The seven-strong Irish-trained challenge is topped by Cheltenham cross country specialist Josies Orders (Enda Bolger/ Donal McInerney 3), owned by J P McManus and successful four times over the course including in this contest in 2015.

The McManus-Bolger combination is also represented by Yanworth (Mark Walsh), a dual G1-winning hurdler and successful on his cross country debut at Punchestown on 17 November, and Blue Templar (Miss Aine O'Connor 5), who scored twice over the banks course at Punchestown in the space of five days in the spring. 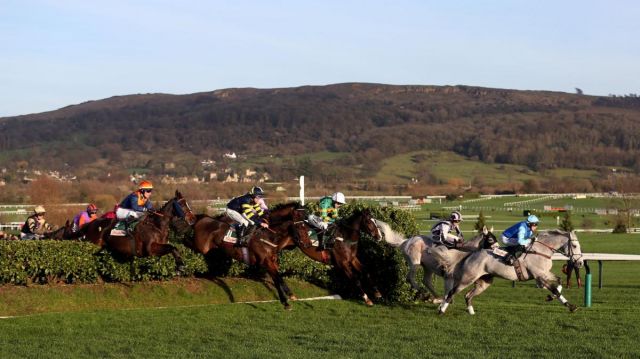 Josies Orders (centre, white cap) on his way to victory in 2015 The British challengers include the 2018 scorer Fact Of The Matter (Jamie Snowden/Gavin Sheehan) and Rolling Dylan (Philip Hobbs/Micheal Nolan), a good fourth in the Glenfarclas Cross Country Handicap Chase at The November Meeting after losing a shoe.

For further information about the Crystal Cup, please go to https://crystalcup.org Tomorrow's most valuable contest is the £60,000 G3 BetVictor Handicap Chase (2.30pm, 12 runners) over three and a quarter miles. 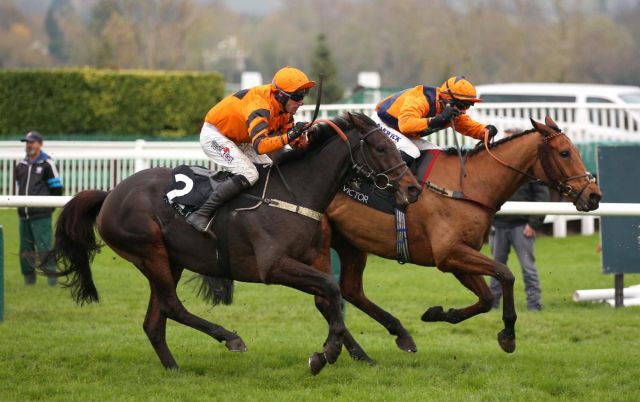 Top-weight West Approach (Colin Tizzard/Robbie Power) is the 7/2 favourite with sponsor BetVictor. The nine-year-old scored over a furlong and a half further in the G3 BetVictor Smartcards Handicap Chase at The November Meeting before unseating his rider in the Ladbrokes Trophy at Newbury later in the month.

The first two horses home from the 2018 running of this contest line up again - Cogry (Nigel Twiston-Davies/Sam Twiston-Davies) and Singlefarmpayment (Tom George/Jonathan Burke).

West Approach (nearside, no 2) getting up to win at The November Meeting The lightly-raced Dandy Dan (Kim Bailey/David Bass) was a progressive performer last season when winning three novices' chases and finished the eight-length runner-up to Mysteree on his first start of the current campaign in a limited handicap chase at Kelso on 26 October.

Andoversford-based Bailey said today: "Dandy Dan had a school this week and goes to Cheltenham on Friday. "I was slightly disappointed when he was beaten on his reappearance at Kelso, but he was well-beaten by the winner and it looked like a good race. "The ground will be fine for him and this looks a good prize to aim for."

Conditions are forecast to be unsettled, with up to 13 millimetres of rain before racing on Friday predicted.

Friday is expected to be mostly dry with a few showers.

Six-year-old Riders Onthe Storm (Sam Twiston-Davies) made an exciting debut for his new trainer Nigel Twiston-Davies when scoring by a length and three-quarters in the Virgin Bet Handicap Chase at Aintree on 9 November - a victory that saw him raised 13lb. Cepage (Venetia Williams/Charlie Deutsch) is 5lb better off at the weights on Saturday and last year's Caspian Caviar Gold Cup runner-up is aiming to become the second consecutive top-weight to win the extended two and a half-mile handicap chase following Frodon 12 months ago.

Paul Nicholls, the most successful trainer in the Caspian Caviar Gold Cup with five wins, is doubly represented. Secret Investor (Harry Cobden) was runner-up in the G2 Daily Mirror Chase at Down Royal at the start of November, while Brelan D'As (Barry Geraghty) went down by a neck to Happy Diva in the G3 BetVictor Handicap Chase at The November Meeting.

Dan Skelton also has two contenders in unexposed novice Not That Fuisse (Harry Skelton) and Spiritofthegames (Bridget Andrews), who was third in the G3 Brown Advisory & Merriebelle Stable Plate Handicap Chase at The Festival™ presented by Magners in March.

Clondaw Castle (Tom George/Jonathan Burke) was fourth in the G1 Racing Post Arkle Novices' Chase at The Festival and finished second on his seasonal return in a dramatic renewal of the Listed Byrne Group Handicap Chase at Ascot at the start of November.

Generous Day (James Davies) has won three of his four most recent starts over fences for Henry Oliver, including when posting a six-length success in a handicap chase over an extended two and a half miles at Kempton Park on 25 November.

Worcestershire-based Oliver said: "Generous Day won nicely at Kempton and we were delighted with the way he jumped and how he saw out the race. "This is another step up, but he is an improving horse and hopefully there is more to come. "He does not want proper winter ground, hence why we want to get another run into him now. It is a very competitive race, but we are looking forward to running." Lalor (Kayley Woollacott/Aidan Coleman), a G1 winner over hurdles, captured the G2 Racing Post Arkle Trophy Trial Novices' Chase at The November Meeting in 2018 and steps up in trip after coming home fourth in the G2 Coral Haldon Gold Cup at Exeter on 5 November.