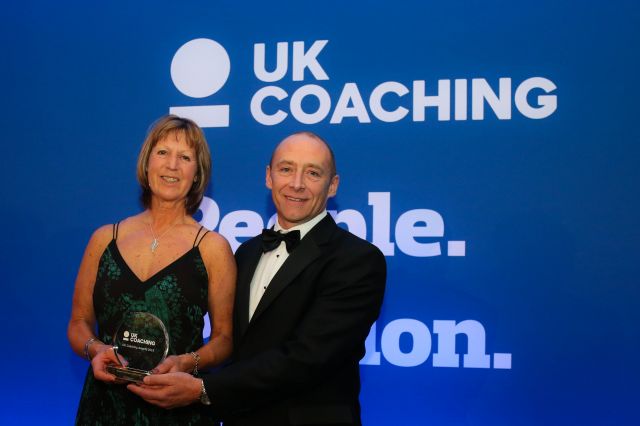 Sue beat off competition from 324 nominations across all sporting disciplines at a ceremony in London last night, 5 December. Sue Ringrose said: "It was an absolutely fantastic night and I was overwhelmed to receive such a prestigious award.

It's been a great journey to develop coaching within racing over the years and to have that work recognised is hugely rewarding." Gill Greeves, Vocational Training Manager at the BHA, said: "Sue's contribution to industry training in British racing cannot be overestimated.

She has been instrumental in improving the careers of hundreds of jockeys, members of racing staff and in developing the BHA's coach education programmes. "The competition was stiff at the awards last night with nominations from around the UK, but Sue is a hugely deserving winner for all the years of hard work and dedication she has put in and we are thrilled for her."

1. Sue Ringrose has a career in the equestrian industry which spans 45 years.

On leaving school she gained her equestrian teaching qualifications and spent several years supporting grassroots and competition riders. As a keen equestrian competitor, she evented to a high level and trained international riders and horses.

She used her coaching links to help fellow competitors to become successful.

Gaining more advanced equestrian coaching qualifications and competing on the international stage, she became a British Eventing Accredited Coach. Sue recently achieved an MSc in Sports Coaching at Leeds University and has been Coach Educator for the British Horseracing Authority since 2014.

2. UK Coaching, with HRH The Princess Royal as its Patron and Chaired by Atholl Duncan, oversees coaching activity across all sporting disciplines.

The prestigious annual UK Coaching awards play a huge part in raising the profile of coaching.

The awards honour great coaching from people and organisations, and demonstrates the role coaching plays in transforming lives and inspiring an active nation.