The nine and a half-furlong contest offers the winner a free and guaranteed start in the feature £200,000 Betway Easter Classic over 10 furlongs at Lingfield Park on Good Friday, April 10.

Century Dream posted a career-best effort when third in the 2018 G1 Queen Elizabeth II Stakes at Ascot, a race in which he finished seventh this year, while G3 runner-up Folamour was fourth in the G1 Grand Prix de Paris at Longchamp last year. 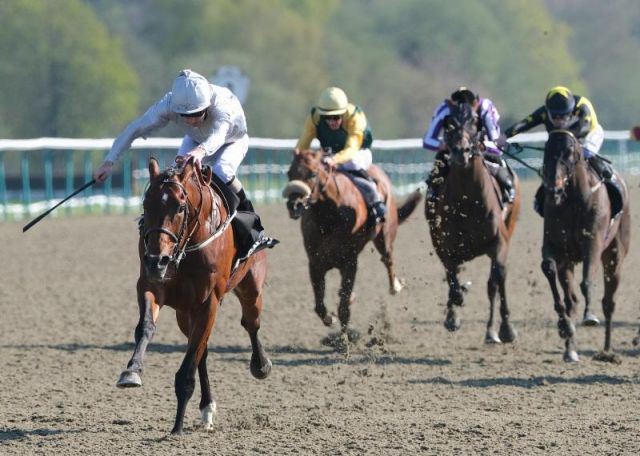 Roc Angel (Fabrice Chappet/Tony Piccone) is a familiar name to British racegoers, having finished fourth behind Matterhorn in last season's Betway Easter Classic and sixth in the Royal Hunt Cup at Royal Ascot in June.

Roc Angel (centre) finishes fourth in the Betway Easter Classic There are three British raiders in total, with Century Dream joined by Nkosikazi (William Haggas/Tom Marquand), who was third in the Listed River Eden Fillies' Stakes at Lingfield Park last time out, and Newmarket handicap sixth Dalgarno (Jane Chapple-Hyam/Stephane Pasquier). Rolando (Andreas Wohler/Mickael Barzalona), who was beaten a neck in last year's Prix Lyphard, is one of two German-trained runners.

The five-year-old has since captured a Listed event at Compiegne in June and was last seen out when fifth in a G3 at Baden-Baden on October 20. Wohler said: "Rolando has been working nicely and comes into this race in good form. "He did not appreciate the heavy ground at Baden-Baden, which is why we have decided to switch him back to the All-Weather. "He seems to get on well with the All-Weather and ran a very good race to be second in the Prix Lyphard last year. Hopefully, he can run just as well this time."

Germany's other contender is Wonnemond (Sascha Smrczek/Bayarsaikhan Ganbat), who defeated Dream Castle in the G2 International Topkapi Trophy in September, 2017.

Other runners to note include Pump Pump Palace (Jean-Pierre Gauvin/Theo Bachelot), a Listed scorer on the All-Weather at Cagnes-sur-Mer in February, and Stellar Mass (Carina Fey/Eddy Hardouin), who landed a G3 in Ireland when trained by Jim Bolger.