A six-race card includes the first race of the season on Cheltenham's Cross Country Course, with 21 horses entered for the £25,000 Glenfarclas Cross Country Handicap Chase (3.00pm) over three and three-quarter miles.

Three of the contenders have already tasted success over the unique course including French challenger Urgent De Gregaine (Emmanuel Clayeux).

Fact Of The Matter is set to make his first appearance since finishing fifth in the Grand Steeple-Chase des Flandres at Waregem, Belgium, in April and the nine-year-old warmed up for his seasonal return with a spin over Cheltenham's Cross Country fences earlier this week.

Upper Lambourn-based Snowden said: "Fact Of The Matter is in good form. We went to Cheltenham to school him a couple of days ago and he really enjoyed himself back over the Cross Country fences. "We took him to Belgium for their Grand National and he finished a really good fifth.

He was a fast-finisher and it was a great experience to go over there. "The Cross Country route has always been the plan with him again this season and we are looking forward to getting him started. "He ran some excellent races at Cheltenham last term, including when winning in December. He was a good second at The November Meeting and we were also helped by the dry autumn we had last year. "Whilst there looks to be a bit of rain around over the next week, the ground should be fine for him.

He is fit and well and can hopefully enjoy another good year." 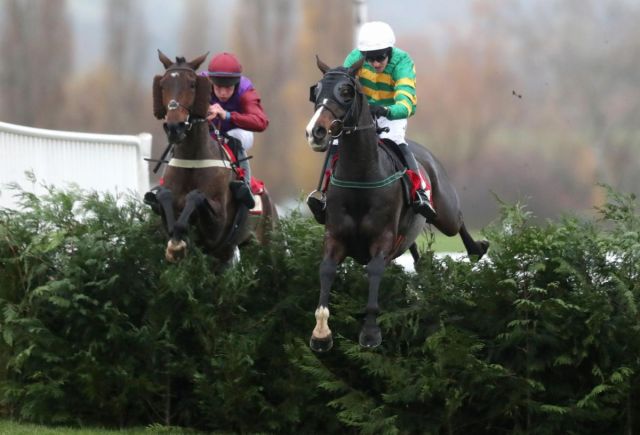 Fact Of The Matter (left) on in action over the Cross Country Course at Cheltenham Tiger Roll's trainer Gordon Elliott has entered Vyta Du Roc, twice runner-up at G1 level over hurdles, and Out Sam. Five Irish-trained contenders also include Yanworth, winner of the G1 Christmas Hurdle in 2016, and Blue Templar, who are both trained by Enda Bolger, and Ballyboker Bridge (Peter Maher), successful in Punchestown's La Touche Cup in May.

Friday's most valuable race is the two-mile £45,000 BetVictor Handicap Chase (1.50pm), which has 16 entries including the last two winners, Doitforthevillage (Paul Henderson) and Bun Doran (Tom George) plus Croco Bay (Ben Case), who captured the G3 Johnny Henderson Grand Annual Handicap Chase at The Festival in March. Jarvey's Plate (Fergal O'Brien) made an impressive debut over fences when taking a Listed novices' chase at Chepstow on 12 October and the six-year-old heads 13 contenders for the £25,000 Steel Plate And Sections Novices' Chase (2.25pm).

His rivals could include Birchdale (Nicky Henderson), winner of the G2 Ballymore Novices' Hurdle on Festival Trials Day in January, and G1 Betway Mersey Novices' Hurdle second Brewin'upastorm (Olly Murphy), who made a successful chase introduction at Carlisle on 24 October.

Several of the 16 entries for the G2 Ballymore Novices' Hurdle (3.35pm, 2m 5f) have made bright starts to the season, including G1 Weatherbys Champion Bumper third Thyme Hill (Philip Hobbs), who took the G2 Unibet Persian War Novices' Hurdle at Chepstow in October.

The going at Cheltenham is currently Good to Soft, Soft in places on all course (Chase, Hurdle and Cross Country). Conditions are forecast to remain unsettled, with further rain expected.