Travelling well behind the leaders, the four-year-old Bated Breath gelding took the lead entering the final furlong and without being asked any serious questions scored by a length and a half from top-weight Urban Icon (Richard Hannon/Pat Dobbs, 12/1).

Harry Bentley said: "I was very happy with where I was positioned. From stall two, there was no point giving it away and trying to ride a bit more of a race off the pace, so I made a bit more use of him than he has done in his previous starts, and the pace was even enough; it certainly wasn't overly quick, so I was definitely in the right place.

"I was always travelling incredibly well behind Joe Fanning [on Vale Of Kent], and it was just a matter of waiting until something opened. Prompting is a big horse, so he can get out of a bit of trouble and he had an awful lot of running, but the King Power horse on my left [Zwayyan] opened up a little bit and that was my time to go. He has a very good turn of foot; he's obviously won over seven furlongs, and he quickened up nicely.

"He handled the track very well. He is a big horse and very well balanced. This was a step up in class for him but I was watching his replays this morning and thought he certainly deserved to go up to this sort of class, and perhaps beyond. He has a lot of class, and off that weight he was always going to have a great chance."

Winner owned by The Seaside Syndicate 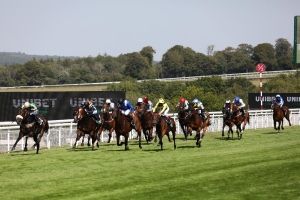