The first of the £75,000 contests is the G2 Peter Marsh Chase (2.40pm, 16 entries), a limited handicap staged over an extended three miles and a furlong.

First run in 1981, when it was landed by future Cheltenham Gold Cup winner Little Owl, the Peter Marsh Chase has a fantastic roll of honour including three other horses who went on the land the Cheltenham showpiece - Bregawn (1982), The Thinker (1987) and Jodami (1993 & 1997).

The top-rated performer among the entries is Definitly Red (Brian Ellison).

The 11-year-old is a five-time G2 winner and was an excellent fourth in the G3 Randox Health Becher Handicap Chase over the Grand National fences at Aintree on 7 December. Last year's Peter Marsh Chase went to Wakanda, trained by Sue Smith.

This year the Bingley trainer could be represented by Vintage Clouds, a two-time winner at Haydock Park who was last seen when third under 11st 12lb in the Betway Tommy Whittle Handicap Chase, staged over the same and distance as the Peter Marsh Chase, on 21 December.

The Peter Marsh Chase has yet to go to an Irish-trained horse but one horse that could change that statistic in 2020 is Prince Of Scars (Gordon Elliott).

Owned by Simon Munir and Isaac Souede, the 10-year-old was a G1 winner over hurdles in 2015 and remains lightly raced over fences.

Geronimo (Sandy Thomson) comes into the Peter Marsh Chase on the back of a win.

The nine-year-old made a successful seasonal reappearance at Newcastle in a handicap chase over two and a half miles on 21 December, having taken two handicap chases last season at Ayr last season (3m and 3m 3f). Thomson, who is based in Lambden, Berwickshire, Scotland, said today: "Geronimo is in good nick and the Peter Marsh Chase is the target. "He has come out of Newcastle really well and this race has been the plan since. "It was great to win over a trip that some people said would be too short for him last time, but we are looking forward to the Peter Marsh Chase and hopefully the ground coupled with the distance will really suit." 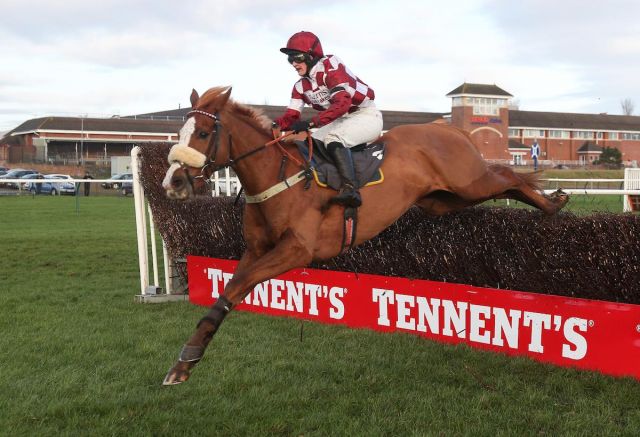 Another Scottish-trained entry is Claud And Goldie, who is trained by Sandy Forster in Roxburghshire.

The 11-year-old posted a career-best effort last time when taking a competitive veterans' contest at Kelso in December.

Two others with leading chances are Acting Lass (Harry Fry), runner-up to Regal Encore in a valuable event at Ascot shortly before Christmas, and the mare Midnight Tune (Anthony Honeyball), who has won her last two starts in mares' contests.

David Pipe has two entries with Champers On Ice and Daklondike, who unseated Tom Scudamore at the fifth fence when starting 5/1 favourite for the 2019 Peter Marsh Chase.

The New One Unibet Hurdle is a trial for the Unibet Champion Hurdle at Cheltenham in March, with the mare Flakey Dove winning both contests in 1994.

The New One, who was retired at the end of 2018, will parade ahead of the race named in his honour.

Three of Saturday's entries met last time out in the G2 Unibet International Hurdle at Cheltenham on 14 December, when Call Me Lord (Nicky Henderson) came out on top by a neck from Ballyandy (Nigel Twiston-Davies), with Pentland Hills (Nicky Henderson) in fifth. Unibet expect Pentland Hills, winner of the G1 Triumph Hurdle in 2019, to come on for his seasonal reappearance and make him the 13/8 favourite.

Cornerstone Lad (Micky Hammond) caused a 16/1 upset last time out when getting the better of dual Unibet Champion Hurdle Buveur D'Air by a short-head in the G1 Fighting Fifth Handicap Hurdle at Newcastle on 30 November.

Hammond, who is based at in Middleham, said today: "We're very pleased with Cornerstone Lad - he is in great form. "The plan is to run in The New One Unibet Hurdle at Haydock and we are looking forward to running on Saturday. "This race has really been the intention since he won the Fighting Fifth and it looks the right race to run in. "Hopefully, he has improved again since and ground conditions look to have come right. "He likes a bit of dig in the ground and that will suit. "Henry Brooke is down to ride and hopefully he can do us proud again."

There is an Irish-trained entry in Darasso (Joseph O'Brien), not seen out since comfortably winning a G2 contest at Navan in March.

The going at Haydock Park is currently Heavy, following 17mm of rain on Saturday night and 4mm on Sunday.

Further rain forecast in the week, with drier conditions expected from Friday. Temperatures are expected to remain mild.

Haydock Park is a dual-purpose racecourse, staging 32 racing days on the Flat and over Jumps in 2018, and a leading conference centre in the north west of England. More information is available at haydock.thejockeyclub.co.uk Haydock Park is part of The Jockey Club which stages thrilling sporting occasions including The Randox Health Grand National, The Cheltenham Festival and The Investec Derby. Millions of people every year enjoy the special experiences The Jockey Club offers through racing, music, food and entertainment. Governed by Royal Charter, every penny made goes back into British Racing to help the sport thrive. The Jockey Club was founded in 1750 and today is the largest commercial group in Britain's second-biggest spectator sport, operating 15 racecourses nationwide, The National Stud, Jockey Club Estates, Jockey Club Catering, Jockey Club Live and the charity, Racing Welfare.