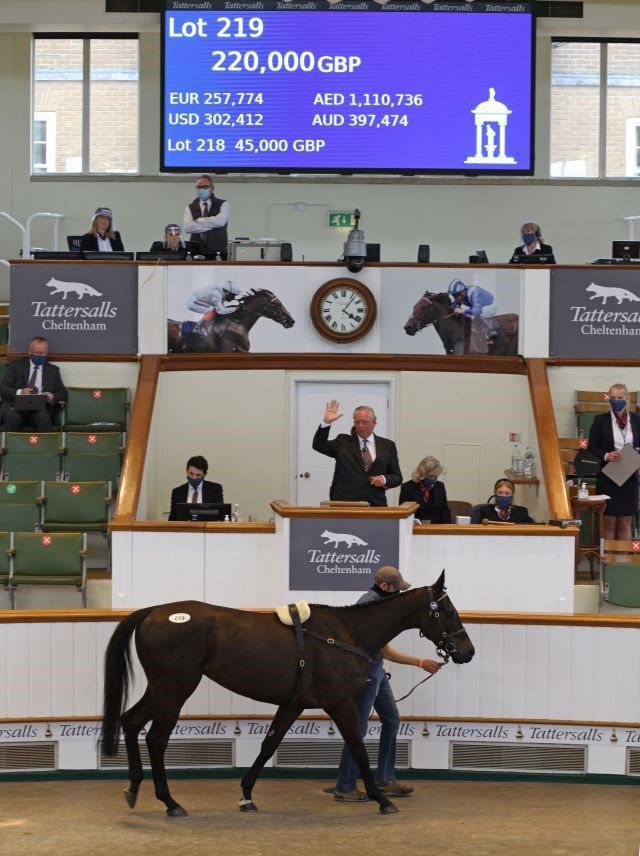 AU FLEURON (FR), winner of his Point to Point Bumper at Tipperary

AU FLEURON proved the star attraction of the Tattersalls Cheltenham March Sale when selling to Bective Stud and Gordon Elliott for £220,000. The four-year-old son of CRILLON ran out an impressive debut winner of his Point to Point Bumper for Denis Murphy at Tipperary on 24th March. He attracted bids from a number of different parties including underbidder Matt Coleman but he was knocked down to Bective Stud and Gordon Elliott for £220,000.

Lot 227 BALLYBOUGH NATIVE will be headed to the County Waterford base of Gold Cup winning trainer Henry De Bromhead, who struck the winning of £195,000 bid via telephone. The son of SHIROCCO was the thirteen length winner of his Point to Point Bumper for Ian McCarthy.

Cormac Doyle of Monbeg Stables offered a four-year-old son of TELESCOPE, Lot 215 PAY THE PILOT who was runner up on debut in a Point to Point Bumper at Punchestown. The gelding showed a striking turn of foot on his only start to date and will now be trained by Kim Bailey after being purchased for £130,000 by Aiden Murphy.

Lot 225 COMPLETE UNKNOWN consigned by Jonathan Fogarty caught the imagination of a number of bidders but it was Tom Malone and Megan Nicholls who secured the Thurles Bumper winner for £115,000.

The sixth Lot to realise six figures was Milestone Stables' ERNEST GRAY, who was knocked down to Anthony Bromley of Highflyer Bloodstock for £105,000 after winning his Point to Point Bumper at Punchestown.

With today's HRI announcement that Irish point to pointing is set to resume on 10th April and English pointing back in full swing, Tattersalls Cheltenham now look forward to the Cheltenham April Sale at Park Paddocks, Newmarket on Friday 23rd April.

Nominations for the Cheltenham April Sale are open and can be made my contacting a member of the Tattersalls Cheltenham Team.