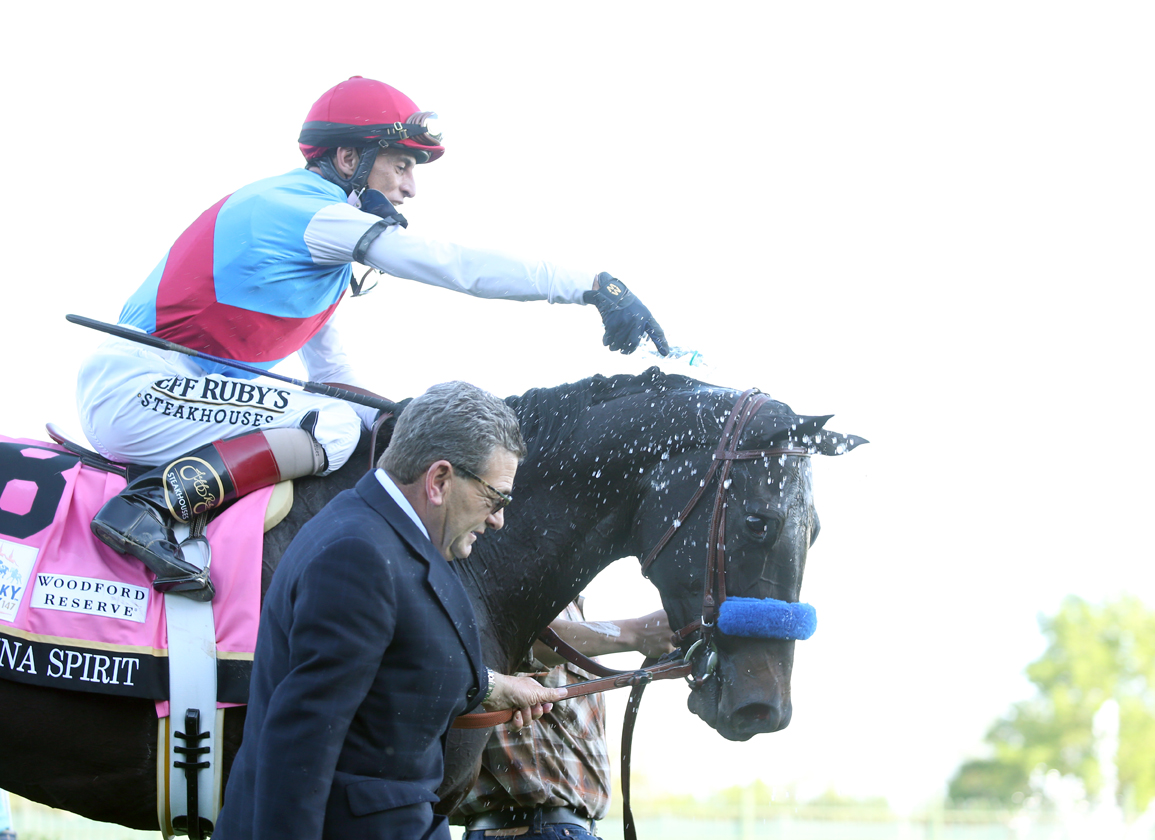 The incident happened after Medina Spirit completed a five-furlong workout in 1:01.40.The breeze took place at about 7:45 a.m. PT.

“I just heard. He had a heart attack,” Zedan said. “It was quick and he didn't suffer. It's unfortunate. In a moment like this there is not much that we can do. All I can say is that he gave us the ride of our lives and brought everyone together. We are mourning this loss, Bob [Baffert], myself, our team and Johnny [Velazquez], as well. We are all very sad.”

California Horse Racing Board Equine Medical Director Jeff Blea said after watching a video of the breeze that there were signs of trouble near the conclusion of the workout.

“He looked like he was struggling the last part, and the rider was pulling him up,” Blea said.

Blea added that by the time a track veterinarian reached Medina Spirit, the 3-year-old colt had already died.

It was Medina Spirit's second work since he finished second in the GI Longines Breeders' Cup Classic.

“We had such high hopes for him and so many plans,” Zedan said. “We were going to go to the Saudi Cup and possibly to Dubai. We wanted to campaign him all next year. The last thing I expected was to hear something like this. It is God's will.”

Throughout Medina Spirit's racing career, Zedan has stood by Baffert and continued to do so Monday.

“We have a great team and Bob is an amazing friend and an amazing trainer,” he said. “This unfortunately happens sometimes. I have full confidence in my team and in Bob. Unfortunately, this happens.”

As per usual in California, Medina Spirit will now undergo a full necropsy examination. A panel of experts will also conduct a review of the fatality.

When asked if he believed there were any suspicious precipitating circumstances behind the sudden death, Blea responded in the negative.

“Absolutely not. We'll address this like we do all our fatalities, try to find out the reason for it and how to prevent it in the future,” Blea said. “But at this point, there is nothing that's untoward that I'm concerned about.”

Baffert later confirmed the news through a statement issued by his lawyer, Craig Robertson.

“It is with great sadness that I am reporting Medina Spirit passed away today from a heart attack at Santa Anita following a workout,” Baffert said. “My entire barn is devastated by this news. Medina Spirit was a great champion, a member of our family who was loved by all, and we are deeply mourning his loss. I will always cherish the proud and personal memories of Medina Spirit and his tremendous spirit. Our most sincere condolences go out to Mr. Amr Zedan and the entire Zedan Racing Stables family. They are in our thoughts and prayers as we go through this difficult time.”

Monday's news was the latest and most tragic twist during a career filled with dizzying highs and lows.

Medina Spirit was sold for just $1,000 as a yearling and later for $35,000 as a 2-year-old at the OBS July 2-Year-Old Sale. After breaking his maiden in his lone start at two, Medina Spirit won the GIII Robert Lewis S. before finishing second in both the GII San Felipe S. and the GI Santa Anita Derby. Dismissed at 12-1, he led every step of the way to cross the wire a half-length in front in the GI Kentucky Derby.

Afterward, however, it was revealed that he had tested positive for the medication betamethasone. That led Churchill Downs to issue a two-year suspension to Baffert, which, as things now stand, will keep him out of the 2022 and 2023 Kentucky Derbies. The New York Racing Association has also attempted to ban Baffert. Its case against him has yet to be resolved.