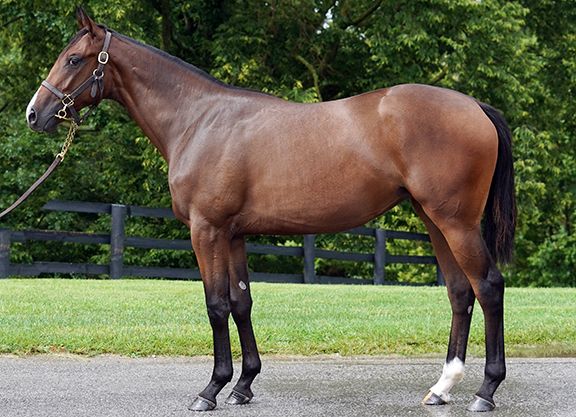 Hip 319, a Medaglia ‘Oro half-sister to Group 3 winner Sergei Prokofiev (Scat Daddy), rolled to the top of the leaderboard about midway through the second day of bidding at the Keeneland September sale after selling to Shadwell Farm for $1.6 million. The Apr. 27 foal was bred in Ontario and consigned to the sale by Anderson Farms and was produced by Orchard Beach (Tapit), a $200,000 graduate of the 2012 September sale, whose produce have now accounted for better than $4 million in turnover at this auction since 2017. Sergei Prokofiev was a $1.1-million acquisition by M.V. Magnier out of the 2017 September sale, while the mare’s foal of 2017, a Hard Spun filly named Turko Beach, made $950,000 in 2018. Early Warning (Air Force Blue) was purchased by David Redvers for $400,000 at this venue 12 months ago. On Monday it was announced that Sergei Prokofiev would stand at Whitsbury Manor Stud.

Sheikh Hamdan’s Shadwell Estate Company, perennially among the leading buyers at the September sale, purchased a pair of fillies by Medaglia d’Oro during Monday’s second session of the auction. Shadwell’s Kentucky manager Rick Nichols warmed up with the $425,000 purchase of hip 231 and then refused to be denied when bidding $1.6 million to acquire a daughter of the Darley stallion out of Orchard Beach (Tapit) from Dave Anderson’s Anderson Farms consignment later in the session. “She was a beautiful filly, extremely well bred and conformationally correct,” Nichols said after signing the ticket on hip 319. “It’s one of those you kind of got to have.” Sheikh Hamdan’s operation purchased 18 yearlings for $11,070,000 at last year’s September sale and was the auction’s second leading buyer.

“[Sheikh Hamdan] told me this morning to try to concentrate on getting some really nice fillies,” Nichols said. “We send all of our really good fillies to England and he promises that he’s going to send them back, but he never does. So our broodmare band is starting to get a little old and we need to rejuvenate it a little bit. We are looking for a nice colt, but mainly our focus will be on some nice fillies.”

Asked if the Shadwell game plan was to buy fewer horses this September, Nichols said, “Yes. We are looking for quality not quantity.”

The Anderson Farms-bred mare Orchard Beach (Tapit) has been quite the blue hen for the operation, producing Dave Anderson’s first million-dollar sale in Sergei Prokofiev (Scat Daddy). She provided the Canada native with a new high Monday when her yearling filly by Medaglia d’Oro (Hip 319) hammered for a $1.6-million to Shadwell Farm.

“It means everything,” Anderson said. “I am very emotional right now. I bred the mother and now I bred this filly. She is probably the most athletic filly that I’ve ever had on the farm. I came in here fairly confident, hoping everyone would feel the same way I do. I am just thrilled that Mr. Nichols bought her for Shadwell. I want to thank Mr. [Joe] Allen for being the underbidder on the filly. So many wonderful people I respect, came by to see the filly and bid her. It means a lot to a little guy from Canada.”

The Ontario-based Anderson Farms purchased Hip 319’s second dam Song and Danz (Unbridled’s Song) for $400,000 with Orchard Beach in utero. Orchard Beach was winless in two starts on the track, but has more than made up for it in the breeding shed. Her first foal, GSW Sergei Prokofiev, sold for $1.1-million to M.V. Magnier at the 2017 renewal of this auction and her second foal, a Hard Spun filly now named Turko Beach, brought $950,000 from Shawn Duggan. She is also responsible for a now-2-year-old colt named Early Warning (Air Force Blue), who sold for $400,000 last year.

“It has been a long time,” Anderson said of his increasing success. “We try hard. I don’t necessarily have the resources to buy the top stock, so I just do the best I can.”

As for this filly in particular, Anderson said, “From the day she was born she was meant to be a sale topper. Not only is she athletic, but she has unbelievable racehorse mind. She wants to do it. She dragged that showman around for three days and never turned a hair. It was amazing to watch. I could sit there for a year and watch that filly walk back and forth.”

Anderson Farms is also responsible for the likes of Canadian Horse of the Year and GI Kentucky Oaks runner-up Wonder Gadot (Medaglia d’Oro) and one-eyed Grade I winner Hard Not to Love (Hard Spun). —@CDeBernardisTDN