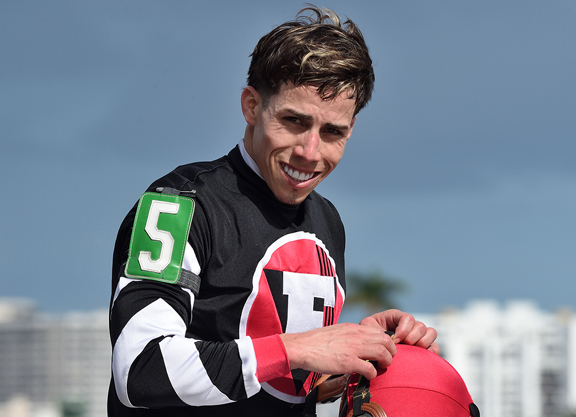 Jockey Irad Ortiz Jr. has been handed a 30-day suspension by the Aqueduct stewards for his ride aboard Gran Casique (Algorithms) in the eighth race on Friday. News of the suspension was confirmed late Sunday by NYRA spokesman Pat McKenna. McKenna said the suspension would begin “some time this week.”

Aboard Gran Casique, Ortiz came over several paths toward the rail on the run down the backstretch and cut off Ragtime Blues (Union Rags) and apprentice jockey Omar Hernandez Moreno. The infraction was so egregious that the Equibase chart caller wrote: “Gran Casique angled in with reckless abandon and bumped Ragtime Blues at the five-eighths and bumped him hard which caused that foe to lose his rider…” Moreno was not seriously hurt.

The stewards apparently agreed with the chart caller, handing Ortiz a suspension that went well beyond the normal five or seven-day penalty usually given to jockeys for careless riding.

Calls to Ortiz's agent Steve Rushing were not returned Sunday. David Grening of the Daily Racing Form reported that Ortiz will not appeal the ruling.

The suspension came on the same day that Ortiz wrapped up the riding title at the 15-day Aqueduct fall meet with 21 wins from 76 mounts. He was not at Aqueduct Sunday and was instead was riding at Hipodromo Camerero in his native Puerto Rico, as was his brother, Jose. Irad Ortiz won three races on the Camerero card.

Ortiz's ride in the GII Remsen S. Saturday at Aqueduct, which he won with Mo Donegal (Uncle Mo), also resulted in controversy. Crossing the wire a nose in front of Zandon (Upstart), he came over, bumped with that rival in deep stretch and put him in tight quarters. The stewards let the result stand.

Social media took notice of the rides by Ortiz, who is often accused of “herding” other riders.

“Aggressive riding is one thing but constantly riding the edge, and sometimes crossing it, is another,” NYRA's Andy Serling wrote on Twitter after the Remsen. “Upon reflection, and further viewing, I think there should have been a DQ in the Remsen. @iradortiz is a great rider but he needs to reflect on his tactics going forward.”