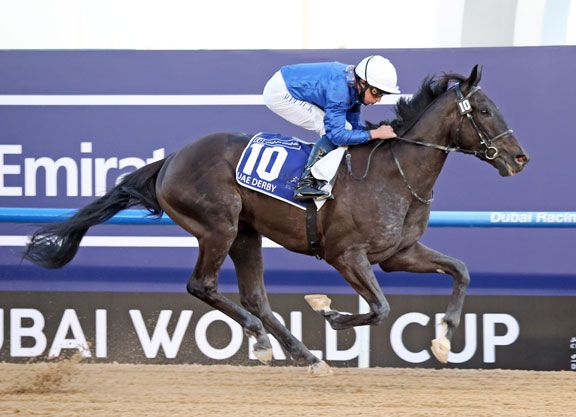 Rebel's Romance, who is ineligible for the European Classics as a gelding, had been assured a spot in the starting gate at Churchill Downs after earning 100 Kentucky Derby qualifying points for his 5 1/2-length UAE Derby win on Mar. 27.

Godolphin has two other colts in the current top 20 by Kentucky Derby points: the race favourite, 2-year-old champion Essential Quality (Tapit), the winner of last weekend's GII Blue Grass S.; and Proxy (Tapit), runner-up in the GII Lecomte S. and GII Risen Star S. and most recently fourth in the G2 Louisiana Derby. A statement from trainer Charlie Appleby posted to Godolphin's Twitter on Wednesday read,

“Having spoken to His Highness Sheikh Mohammed, we feel he needs more time and he will now be aimed at the last leg of the U.S. Triple Crown, the GI Belmont S.”

Rebel's Romance won his first two starts last fall under William Buick going a mile on the all-weather at Newcastle and Kempton.

He took to the dirt when beating Mouheeb (Flatter) in the UAE 2000 Guineas Trial on Jan. 14, and while Mouheeb went on to uphold that form when winning the G3 UAE 2000 Guineas, Rebel's Romance headed to the Saudi Derby, where he finished fourth five weeks prior to his UAE Derby romp.

In other Classic news, Godolphin and Charlie Appleby were responsible for four of the seven colts added to the June 5 G1 Cazoo Derby during Wednesday's second entry stage.

They are Adayar (Ire) (Frankel {GB}), a nine-length winner on his second start at Nottingham; Hurricane Lane (Ire) (Frankel {GB}), who scored on debut at Newmarket; One Ruler (Ire) (Dubawi {Ire}), last seen finishing second in the G1 Vertem Futurity Trophy at Doncaster; and Yibir (GB) (Dubawi {Ire}), who has won his last two starts including the Haynes, Hanson & Clark Conditions Stakes at Newbury.