THOROUGHBRED DAILY NEWS - A Heater In the Turf Classic 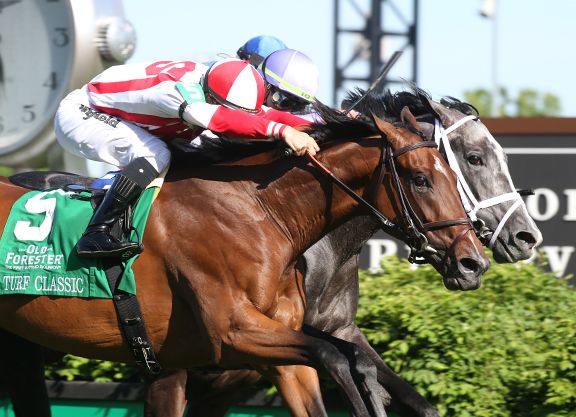 Domestic Spending (near) joins Colonel Liam on the line | Horsephotos

Six months ago, Klaravich Stables' Domestic Spending (GB) (Kingman {GB}) was the leader of a very strong group of turf sophomores, having won the valuable Saratoga Derby over the summer before a year-ending defeat of Smooth Like Strait (Midnight Lute) in the GI Hollywood Derby.

But while that one was given his winter's rest, Robert and Lawana Low's Colonel Liam (Liam's Map), a progressive sort who finished within three-quarters of a length of Domestic Spending at the Spa last summer, had assumed 'King of the Hill' status, courtesy of a three-race skein that included the GI Pegasus World Cup Turf in January and the GII Muniz Memorial S. Mar. 20. Saturday's renewal of acquaintances in the GI Old Forester Bourbon Turf Classic at Churchill Downs lived up to expectations, as they hit the wire together and the judges could not split them. Colonel Liam, a touch keen passing under the wire for the first time, found the perfect spot in the box seat, as Smooth Like Strait enjoyed a cheap time of things on the engine, doling out fractions of :24.40 for the opening couple of furlongs and an easy :49.17 beneath Umberto Rispoli. The second that pace-pressing Cross Border (English Channel) came under a Ricardo Santana, Jr. ride leaving the three-eighths pole, Colonel Liam was asked for a bit of acceleration from Irad Ortiz, Jr. and was pulled out into the two path to deliver his challenge.

Colonel Liam was roused to the front a furlong from home, but Domestic Spending, given a quiet time of it towards the back of the field for the opening six furlongs, followed his stablemate and defending champion Digital Age (GB) (Invincible Spirit {Ire}) into the lane, shot the gap between the latter and a weakening Cross Border, was steered out and around Colonel Liam as Smooth Like Strait hung to his right and hit the line on even terms.

Colonel Liam is the one of six graded winners and three Grade I winners for Liam's Map and is bred on the same cross as 'TDN Rising Star' Wicked Whisper. Colonel Liam is one of two winners from four to race for his dam, an unraced daughter of the Phillipses MGISW turf distaffer Wonder Again, whose full-brother Grass Wonder was the champion 2-year-old of his generation in Japan and later won the Takarazuka Kinen over 2200 meters (11 furlongs) and the 2500-meter (12.5-furlong) Arima Kinen on two occasions before embarking on a stud career. This is also the same female family responsible for GSW Hopeful Growth (Tapiture). Amazement is the dam of Colonel Liam's 3-year-old half-sister Lovely Dee (Shackleford), a juvenile colt by Tapiture and a yearling colt by the late Arrogate, like Liam's Map a son of Unbridled's Song. She most recently visited Copper Bullet (More Than Ready). Domestic Spending is the lone produce for his stakes-winning dam (died 2017), a daughter of G3 Nell Gywn S. winner and MG1SP Cloud Castle (GB) (In the Wings {GB}), whose GSW Queen's Best (GB) (King's Best) produced GI Breeders' Cup Filly & Mare Turf winner Queen's Trust (GB) (Dansili {GB}).