Trade at Book 2 of the Tattersalls October Yearling Sale continued in record-breaking fashion with turnover of 17,016,000 guineas on the final day pushing the sale turnover past 50 million guineas for the first time in the sale’s history whilst the average and median also recorded new highs. The clearance rate for the sale was a remarkable 88%. 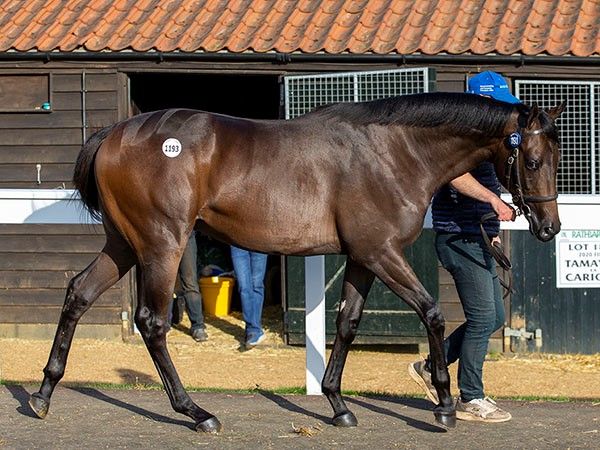 A TIME TEST colt out of the RAINBOW QUEST mare AURELIA became the latest successful pinhook for John Foley’s Ballyvolane Stud when knocked down for 400,000 guineas to Alastair Donald of SackvilleDonald, following a prolonged bidding duel with trainer Richard Hughes.

Ballyvolane Stud has enjoyed significant pinhook success at Book 2 in recent years, selling colts by LOPE DE VEGA and NO NAY NEVER for 325,000 guineas in 2018 and 2019 respectively.

The top-priced foal by his sire in 2020 when purchased for 56,000 guineas at the Tattersalls December Foal Sale, the TIME TEST colt became the stallion’s highest-priced horse sold in the ring to date.

He is a half-brother to HARLEQUEEN, who finished third in both the English and Irish Oaks, and comes from the family of Grade 1 winner FORTE DEI MARMI.

A delighted John Foley commented: "He has been very popular this week, he had 20 vets. He is an amazing horse, he has never missed a beat all week. Since we have had him he has been amazing. He is a special horse, the best we have ever had. His attitude, his presence, he is a 'wow' horse.

"He was a lovely, quality, straightforward foal and very well produced by the National Stud – there is a reason he was the dearest Time Test foal. There are some that are nice foals who come back as nice yearlings, but he has done better than we thought. He has developed and he has improved the whole way through."

Foley had signed for the colt as ‘Otilia’ last December and revealed: "Otilia is myself and three friends, it is the first one we have pinhooked together. We wanted to take a punt on the stallion, we knew that this lad as foal would cost a few quid and, if he did not work out, we thought with three of us involved the pain wouldn't be too much. It was a fair throw for him as a foal, we were taking a punt on him as a stallion, but sons of Dubawi have done well.

"Time Test has had a great year, he looks very good. His stats are good and I will definitely be using him next year! He will be very popular with breeders."

Foley continued: "It is amazing to get a result like this as we all work hard – this is a very tough business and there are more hard days than good days. We have great help at home, Donnacha Higgins helps me at home and gives me a hand with the yearlings, and John, my Dad, who is 77, mucks out six or seven boxes every day. We have great staff here too, and everyone is doing their best – it makes a huge difference when you have staff who want it to do well, and when it works out it is great." 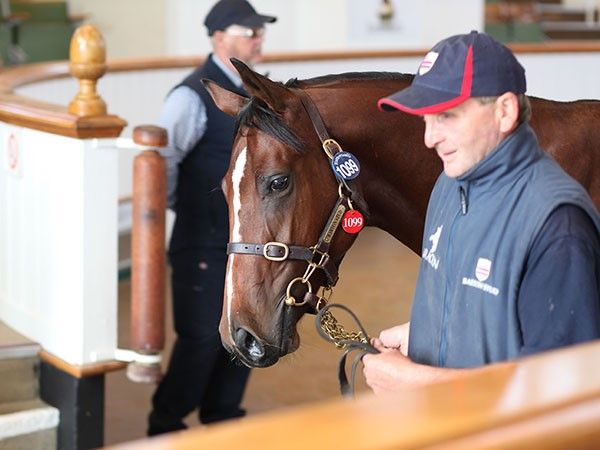 The Hong Kong Jockey Club’s Mick Kinane again featured amongst the names at the top of the buyers sheet after going to 350,000 guineas for a colt by RIBCHESTER consigned by Barton Stud.

The Hong Kong Jockey Club purchased five yearlings at Book 1 of the Tattersalls October Yearling Sale for 1,500,000 guineas and have added another three in Book 2 for a total spend of 2,025,000 guineas.

The April-born colt is a half-brother to this year’s Group 3 Anglesey Stakes runner up ANDREAS VESALIUS.

"He is a gorgeous horse, but that is a gorgeous price too!" smiled Mick Kinane. "He was a standout for us, I saw him walking in the other day. This is the first by Ribchester that we have bought so we hope he is lucky, but he is a beautiful horse. The half-brother Andreas Vesalius is now in Hong Kong, I don't think he has run yet."

The April-born colt was consigned by Barton Stud and bred by the Bostwicks of Biddestone Stud out of the RAVEN’S PASS mare VITELLO, herself a winner and fourth in the Listed Blenheim Stakes at two.

A delighted Tim Bostwick commented: "I am shocked! But he is a cracking colt. We bought the mare here empty and this is her third foal, her second foal has got blacktype and has been purchased to go to Hong Kong which has attracted these guys. I am thrilled, what more can I say?

"Once again I have to pay credit to Tom Blain at Barton Stud, all of our mares board with Tom and they just do such a fantastic job. My wife Gill is not here, she is poo-picking paddocks at home. She has probably collapsed now and is enjoying a glass of something bubbly!" 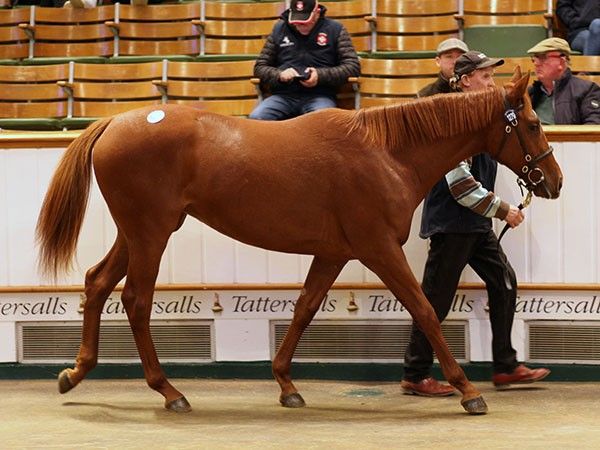 A regally bred daughter of ZOFFANY was the subject of a lengthy head-to-head bidding duel early in the evening, with the winning bid of 350,000 guineas struck by Thady Gosden who was standing in the stairwell with his father John.

The successful duo saw off the attentions of underbidder Simon Crisford to secure the Kilcarn Park consigned filly, who boasts one of best pages in the stud book.

Her dam CURTSY is a GALILEO half-sister to CONTRADICT, the dam of joint European Champion three-year-old MISHRIFF who claimed the Group 1 Juddmonte International on his most recent start.

Thady Gosden commented: "She is a brilliant moving filly, she has some class about her. She is an exceptional type and it is a happening pedigree that we know well. It would be nice if she is the same as Mishriff on the track! Mishriff runs on Saturday in the Champion Stakes, and the ground seems to be holding up at the moment.

"She is for a new client, and hopefully she will do well for them. This filly has a very nice pedigree, so will have some residual value too."

The daughter of ZOFFANY was the only yearling brought to Book 2 this week by consignor Kilcarn Park, who purchased her dam CURTSY for 95,000 guineas at the 2018 Tattersalls December Mares Sale.

Kilcarn Park’s principal Patrick Cosgrove commented: "Delighted, over the moon! We bought the mare here in 2018 in-foal to Almanzor, and we sold that foal as a yearling here last year for 95,000 guineas. We decided to come here to sell again this year, and I am happy. The mare is in-foal to Make Believe and she has a colt foal by Bated Breath. It has been great watching Mishriff this summer." 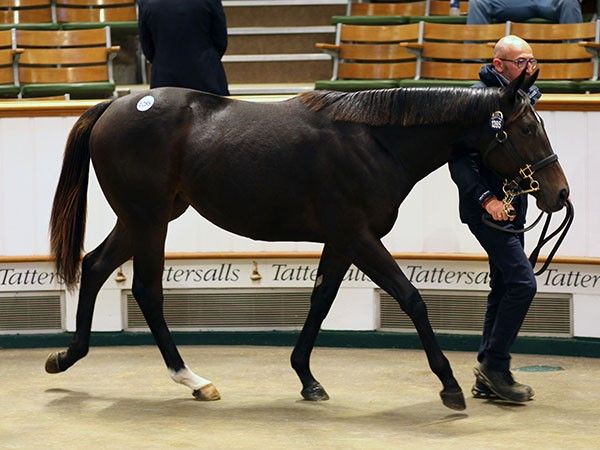 The equal highest priced filly of the session followed only a few lots later when a daughter of WOOTTON BASSETT was knocked down to Matt Coleman of Stroud Coleman Bloodstock for 350,000 guineas.

Her consignors Haras D’Etreham brought two yearlings to the sale by the sire, who stood at Etreham until bought by Coolmore Stud in 2020.

Matt Coleman revealed: "I've bought her for Anthony Stroud, who couldn't be here today, for an unnamed client. She's just a great-moving filly and we thought she was pretty much the filly of the sale. We bought the filly Audarya by Wootton Bassett, who has been lucky for us, and obviously he's become a fantastic sire so we're delighted to get her."

WOOTTON BASSETT himself has enjoyed a stellar season on the racecourse led by the French Group 1 winning fillies INCARVILLE and ZELLIE as well as the British and Irish Group 2 winners ROYAL PATRONAGE and ATOMIC JONES. 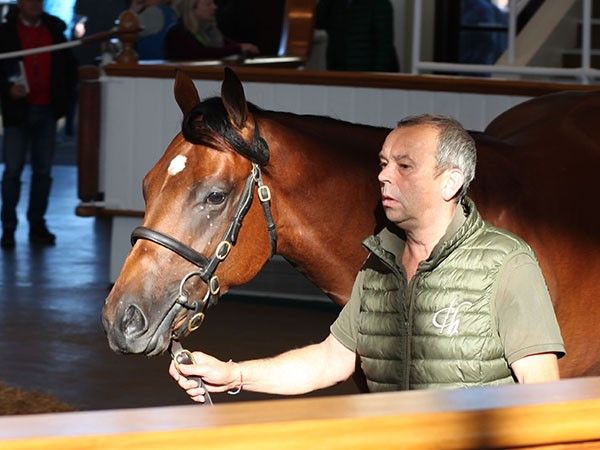 Ben McElroy has already demonstrated his admiration for the progeny of KODIAC this week and struck again at 285,000 guineas for a son of Tally-Ho Stud’s star stallion.

The Croom House Stud consigned colt is out of the BORN TO SEA mare TASTE THE SALT, whose first foal CASHEW is a winner at two this year. TASTE THE SALT is a half-sister to the Group 2 Norfolk Stakes winner BAITHA ALGA.

"For me he is the best colt in the sale, if not maybe the best horse I have seen since I have been at European sales," enthused the US-based bloodstock agent.

"That's my quintessential horse there. He is a great mover, he has plenty of scope, and the way he behaved out the back, I am delighted to get him. A bit like the filly yesterday, I was worried what he'd cost. I could see him making 400,000 to 500,000 just as easily, but I really think he is a special horse. He goes to the States. There is a bit of stamina there too as the second dam is by Fantastic Light, and goes back to a nice family."

Of staying in Newmarket for Book 2, McElroy added: "I am done now. I stayed for Book 2 last year, and I just said I'd take a look around and see what was here and I obviously really liked the filly last night and this colt. They were worth staying for. I have bought a wide range of prices, all similar types, but horses in different price ranges."

The purchase of the KODIAC colt, and a filly by the same sire for 340,000 guineas during Tuesday’s session, in addition to five lots purchased during Book 1 brought McElroy’s total spend during the October Yearling Sale to over 2,000,000 guineas.

“At the end of Book 1 of the Tattersalls October Yearling Sale last week we referenced the depth and diversity of the demand, and the momentum established at Book 1 has been very much sustained throughout the three days of a record - breaking Book 2.

“New record turnover at any sale is always an achievement, but for Europe’s largest yearling sale to reach new levels as we all strive to return to normality after 18 months of turmoil is pretty extraordinary. Only ten years ago Book 2 of the October Yearling Sale had turnover of a fraction over 25 million guineas and an average price below 40,000 guineas. This year’s October Book 2 has broken the 50 million guineas mark for the first time, produced a record average in excess of 80,000 guineas and also an unprecedented median.

“Similar to Book 1, international buyers have again made a massive contribution to the market, with notable participation from American and Australian interests as well as from Hong Kong, Japan and throughout the Gulf region, but perhaps the most encouraging feature of the record - breaking sale has been the domestic demand. British and Irish trainers have been the backbone of the sale and to see such a voracious appetite for quality yearlings, not only at Books 1 and 2 of the October Yearling Sale, but also at our Newmarket based yearling sales last month, has been fantastic.

“As ever, we are hugely indebted to the consignors from Britain, Ireland and further afield, who make Books 1 and 2 of the October Yearling Sale the showcase for so many of the finest yearlings to be found in Europe. Consistent quality is the key to attracting the buyers in such numbers and we now turn our attention to Book 3 of the October Yearling Sale where buyers will continue to find yearlings of the highest calibre."

Book 3 of the Tattersalls October Yearling Sale starts at 10am on Thursday, 14th October.