The three-year-old Invincible Spirit colt, homebred by owner Khalid Abdullah's Juddmonte Farms, hit the front approaching the final and ran on well to score by a comfortable length and a quarter from Mister Snowdon (Richard Hughes/Shane Kelly, 5/1).

Steve Eastwood, representing Sir Michael Stoute, said: "That was straightforward. He did it really well and I would imagine he will step up to Group company now."

The two-year-old Belardo colt had finished fourth on debut at Haydock on 18 July and showed the benefit of that experience as he ran on well in the final furlong to score by half a length from 66/1 chance Raging Rascal (Tom Ward/Harry Bentley).

Tudhope, successful earlier in the afternoon on Summerghand in the Unibet Stewards' Cup, said: "It was a nice performance from Titan Rock.

"He travelled into the race really well and picked up nicely - he felt like a nice horse to me.

"He is still a nervous horse who is improving, but he is going to get better.

"Whatever Titan Rock does at the moment is a bonus."

Trainer John Quinn said: "Titan Rock ran really well at Haydock; he didn't blow the start, he just went back on his bum when the gates opened and they were gone, and the ground was soft and I think he handled it, but I think he preferred better ground. He is a horse we like.

"He was eligible for the Book One bonus here, so that is massive, and that was on today's race, hence we brought him here, but we felt he was good enough to come here. We will have a look and a think now. He is a fine big animal; a nice colt." 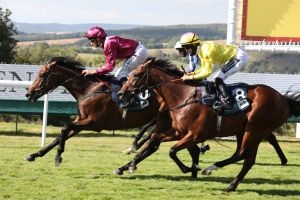 The Qatar Goodwood Festival 2020 came to close with the LG Signature Apprentice Handicap over nine furlongs, which went to top-weight and 9/2 joint-favourite Muraad (Owen Burrows/Cieren Fallon).

It was the other 9/2 joint-favourite Overwrite (Mark Johnston/Tom Greatrex) that looked to have the race in the bag as entered the final furlong with a clear lead. However, Fallon got a fine tune out of the Hamdan Al Maktoum-owned Muraad to get up and score by half a length.

Trainer Owen Burrows said: "Brilliant! I said to Cieren, don't panic. Muraad has led the last twice, but I didn't want him to get into a fight to try and lead - he had a lot of weight, 10st. He has given him a great ride - a cool head on young shoulders.

"I don't know whether Muraad quickened or whether he stayed on; this is his first try at a mile and one furlong. On that he will get a mile and a quarter, no problem. "This is my first winner at Glorious Goodwood. I am just lucky that I've got a great team behind me and we have some nice horses."

Cieren Fallon said: "The race panned out how I predicted.

"A lot of people wanted to be handy and whilst Muraad jumped OK, a lot of other riders pressed forward to get a nice position.

"They were a lot of pace on the race and I took my time on him as they went a strong gallop.

"I had two options of either going round the field or waiting for a gap to come and thankfully one did.

"He burst through the gap and Muraad had a lot of determination.

"He was really game and I would be happy to step him up to a mile and a quarter.

"Hopefully, he can continue his winning ways now."