Shishkin vs. Energumene Remains the Top Draw at Cheltenham 2022

Shishkin vs. Energumene Remains the Top Draw at Cheltenham 2022 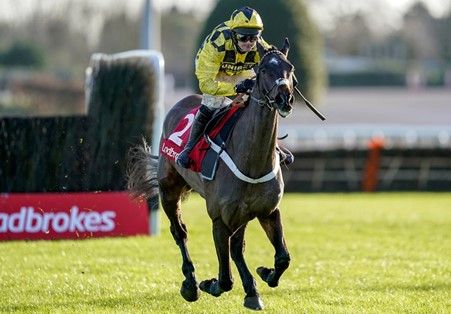 It’s still early days in 2022, but for many racing fans the standout contest of the year so far was the Clarence House Chase at Ascot on 22nd January. It was pulsating from start to finish, with an electric atmosphere provided by the Ascot faithful, one that grew in intensity as Shishkin finally caught Energumene and squeezed past him to win by a length. It was superb action, showing the qualities of both horses. But Shishkin, in particular, showed those deep reserves of stamina and force of will that only the best horses can call upon when needed.

The pair will, of course, meet again in a few weeks in the 2022 Queen Mother Champion Chase at Cheltenham. We can’t speak for all racing fans, but Shishkin’s victory did not draw a line in the sand, and, if anything, it acted the whet the appetite for the pair to clash again next month. The bookies shaved Shishkin’s Champion Chase odds, but only marginally so. Nicky Henderson knows that Shishkin gave everything to just about beat Energumene, and the finest of margins made the difference.

A lot has been made of the race, but one of the best summaries came from a Twitter user, @racingblogger:

“I’m still shaking, that was one of the greatest races I’ve ever had the pleasure of watching live on track, I think we’ll all look back in 10 years time and still being saying wow, remember that day Shishkin out battled Energumene at Ascot.”

Battle of the Two-Milers Isn’t Over Yet

But this isn’t over. And if anyone thinks Shishkin is somehow nailed on to win the Champion Chase, they really need to go back and look at the Clarence House Chase. Yes, Shishkin dug deep and provided a champion’s performance, but he was struggling before the run-in. The bookies cut Shishkin’s Champion Chase odds as a natural reaction to the win at Ascot, but, objectively speaking, the market should be tighter between the pair. At the time of writing, Shishkin is around 1/2 for the Champion Chase, with Energumene at 3/1.

Can the pair deliver another pulsating battle at Cheltenham? It is possible. But even if the drama is not quite on that level, it should still represent the biggest draw of the Festival. In fact, what’s going to be interesting is to see what Willie Mullins (Energumene’s trainer) and Paul Townend (jockey) can come up with in terms of a battle plan to trump Shishkin on 16th March. For instance, Townend might look to put even more distance between Energumene and Shishkin before they reach the final couple of flights. There’s also that uphill finish at Cheltenham to reckon with. At the moment, you’d fancy Shishkin to be better placed to tackle it, given the incredible finish at Ascot.

Of course, it’s often the case in racing that all the focus goes on one horse or a pair of horses, and then you end up with a shock winner. While that feels unlikely, some have warned that this is not a two-horse race. That includes Patrick Mullins, who recently analysed the Clarence House Chase on the Sporting Life Racing Podcast. Mullins (Willie’s son) cautioned that others might have a say, including last year’s favourite Chacun Pour Soi. You can get around 12/1 for Chacun Pour Soi, who flopped in the 2021 Champion Chase after going off as odds-on favourite.

But whether this one sees a shock winner or not, the framing of the race and the narrative of the build-up are all going to be about round two of Shishkin vs Energumene. If it is half as good as round one, we are all in for a treat.