There are five horses rated 150 or higher and the top-rated entry on 159 is Cornerstone Lad, the winner of the Grade 1 Fighting Fifth Hurdle at Newcastle in 2019.

Esprit Du Large, trained by Evan Williams, is a Grade 1 winner over fences having landed the Henry VIII Novices’ Chase at Sandown in 2019 and there are several other Grade 2 and Grade 3 winners among a quality initial entry.

Now a fortnight later than its usual slot, the ‘Morebattle’ is the centrepiece of Kelso’s richest-ever raceday on Saturday, March 6 when £209,000 will be up for grabs.

Well done to Grant Cockburn for riding out his claim on Nick Alexander’s Rydale at Kelso recently.

It was the 75th winner of his career on a horse springing an 80–1 upset and several of his weighing-room colleagues , including Blair Campbell and Tom Willmott, gave him a great reception afterwards.

We have a strong pool of talented young jockeys at the moment and next in line to ride out their allowances are Stephen Mulqueen and Sam Coltherd who are on 73 and 72 winners respectively.

Details are below of the 2021 Godolphin Stud & Stable Staff Awards which are on live and free to air on Racing TV on Monday Feb 22nd.

It is the 17th year of the awards and it will be the inaugural virtual version due to the coronavirus pandemic.

Good luck to all the finalists! 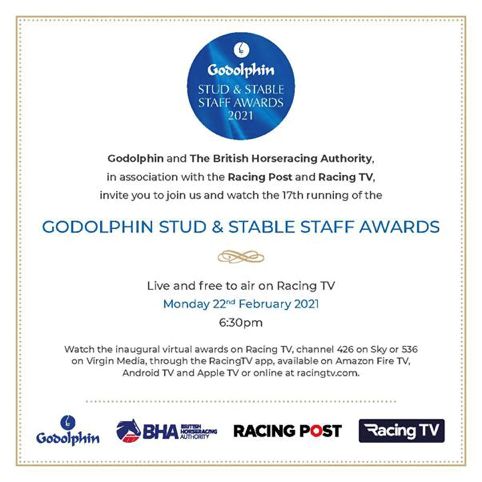