The rider partnered 79 winners during the season, finishing seven ahead of Hollie Doyle, and received his cheque for £8,000 at Chelmsford City this afternoon.

“It has been a great winter from start to finish. I am very grateful for all the support and my agent Guy Jewel has done a good job. It has been a solid season to ride 79 winners and they have flowed nicely through the year. I am pleased with myself.

“For me, only being able to ride at one meeting has been a positive and I think a lot of the lads in the weighing room are now in favour. You can relax a bit into your day and there is no rushing because you are worried that you are going to let somebody down by not getting somewhere. It has been nice.” 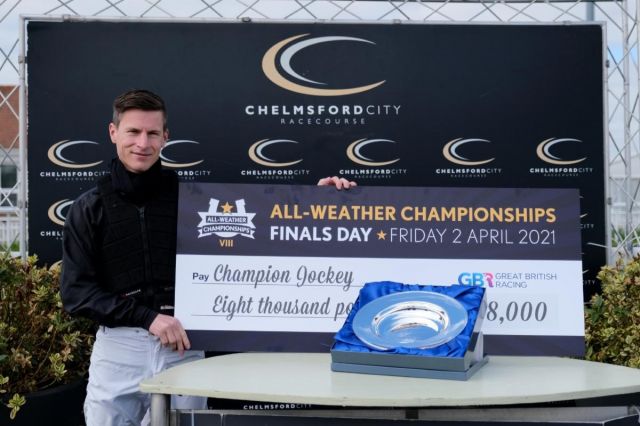 Michael Appleby took the All-Weather Champion Trainer honours for a fourth consecutive season and fifth time in all with 59 victories, his highest ever total.

“It is a good achievement, we’ve got a great team at home who work very hard all winter, so they all deserve it. We have a great bunch of owners, they back the yard and a lot of the owners have been with us a long time, so it’s a great achievement.”

Reflecting on the key factors that have turned the All-Weather season into such a success, he added:

Looking ahead to the turf season, he said:

“We have some nice horses for the turf, a few of the All-Weather horses will have a break now and then come back for the second part of the turf season. We have not got many two-year-olds in at the moment, so hopefully we will get a few more in for the second half of the season.” 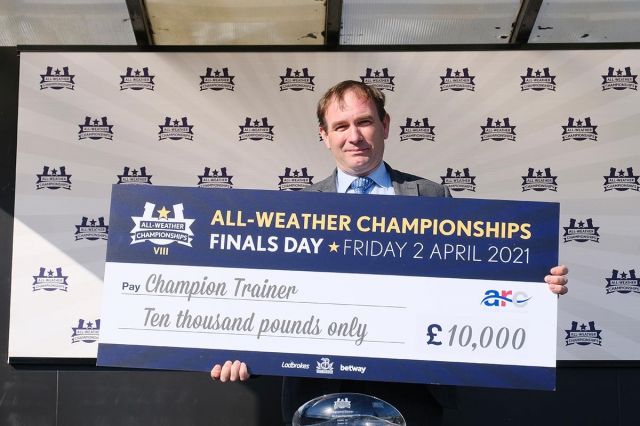 Marco Ghiani, who is apprenticed to Newmarket trainer Stuart Williams, edged out Laura Person in the race for All-Weather Champion Apprentice with 28 winners.

“I am really grateful; this is my third season and it has been going well. I have never been close to being champion apprentice and this year I had a great opportunity to find some good horses and good trainers who will support me.

“My first winner was here at Lingfield two years ago and now I’m on 65 winners, so it’s been a lot of winners since. Stuart Williams has helped me a lot – I am really thankful to him.

“Starting out with Luca Cumani definitely helped me a lot because when I first got here, I was at the racing school and obviously I’d just started riding racehorses. He taught me how to gallop, how to canter, the right paces, and then sent me to his son Matt Cumani in Australia for a winter. He gave me a good chance to learn faster and then has kept supporting me like an owner when he retired. He still sends me messages if I have ridden a horse and he didn’t like the ride!

“I am definitely going to try to be champion jockey on the turf. I have some good trainers supporting me and hopefully they have some nice horses for me too!” 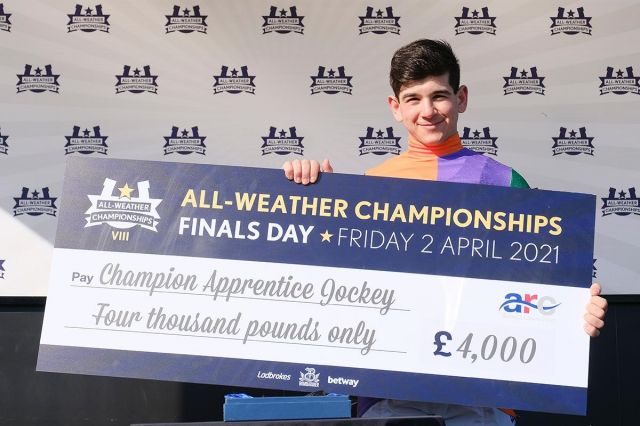 Godolphin secured the All-Weather Champion Owner title for a seventh straight year, with G3 Betway Winter Derby victor Forest Of Dean starring among 42 wins together with a raft of unexposed three-year-olds.

The Winning Most Horse battle went right down to the wire, with both Nortonthorpe Boy and Khatm registering six wins apiece.

Khatm had the chance to go for a seventh victory at Chelmsford City today but could only finish fourth, meaning that Nortonthorpe Boy took the prize for trainer Phil McEntee by virtue of superior placings.

“I am absolutely over the moon. Michelle and Tom, who own Nortonthorpe Boy, have come up to the yard today. They have not been able to go racing all winter, so it has been nice to have them with us today.

“We are only a small yard and to do it today under such close circumstances has been brilliant. To have three horses in with a chance in the final days of the season is almost unbelievable really.

“The Winning Most Horse is something we like to target each season. Spare Parts shared the title a few years ago and then Split Down South was in second last year when the season was cut short. To go on better this year with a horse who cost £7,000 is brilliant.

“Mick Appleby and George Boughey are good friends of mine. We have been having a bit of banter this week and both of them have messaged me today. It has been great.” 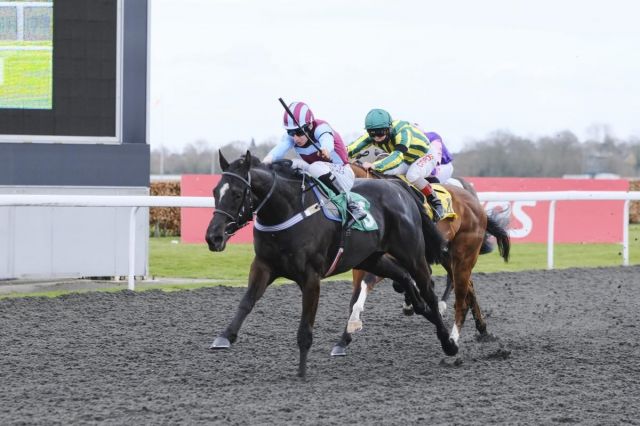