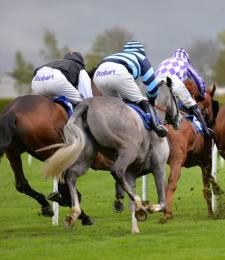 There are five horses rated 150 or higher and the top-rated entry on 159 is Cornerstone Lad, trained by Micky Hammond, the winner of the Grade 1 Fighting Fifth Hurdle at Newcastle in 2019.

Esprit Du Large, trained by Evan Williams, is a Grade 1 winner over fences having landed the Henry VIII Novices’ Chase at Sandown in 2019 and there are several other Grade 2 and Grade 3 winners among a quality initial entry.

The top-rated of Nicky Henderson’s trio is Call Me Lord (150), who ran in last year’s Champion Hurdle for his six-time champion trainer.

Olly Murphy-trained Brewin’upastorm, on a lofty 155, is a winning chaser but is also a smart hurdler as he illustrated when runner-up in Grade 1 company at Aintree two years ago.

The sole Irish entry is The Shunter, trained by Emmet Mullins and the winner of the Grade 3 Unibet Greatwood Handicap Hurdle at Cheltenham in November.

Scottish trainers are responsible for six entries with Iain Jardine’s Voix Du Reve, a Grade 1 chase winner when with Willie Mullins, the highest rated on 149.

“Sponsored for the first time by bet365, we decided to move the Morebattle to March where it will become the feature race of Kelso’s richest-ever raceday with £209,000 up for grabs. The supporting card features the Grade 2 Premier Hurdle and the Listed Premier Chase, so it will be quite an event.”

Bet365 have already formed an ante-post market and they have installed Prochema as the 8-1 favourite.

A very smart horse on the Flat, he has taken to hurdles well since joining Dan Skelton and is the winner of two ‘jumpers bumpers’ at Newcastle recently.

For more information: contact Gordon Brown on 07850 258063 or Jonathan Garratt (details below).