It means Blaklion is the last horse to be guaranteed a run in the big race at Aintree.

Some Neck and Welsh Grand National winner Secret Reprieve are the top reserves.

Stable jockey Paul Townend will miss the ride after suffering a foot injury.

A reserve can make the line-up if any contenders are pulled out before 13:00 BST on Friday.

Cloth Cap, trained by Jonjo O'Neill, is the 4-1 favourite to give owner Trevor Hemmings a record fourth win in his green, yellow and white colours.

Who could be Grand National headline makers?

All the Grand National entries

Mullins is one of four amateur jockeys to be booked for rides in the race - with Jamie Codd on Milan Native, Derek O'Connor riding OK Corral and Sam Waley-Cohen aboard Jett.

They will be bidding to be the first amateur rider to triumph since Marcus Armytage in 1990 and are permitted to ride after the latest easing of lockdown restrictions, having been barred from competing at last month's Cheltenham Festival.

One contender who looks sure to be popular is Minella Times, the mount of Rachael Blackmore - who made history at Cheltenham by becoming the first woman to be leading jockey at the meeting.

Bryony Frost is on Yala Enki and Tabitha Worsley rides Sub Lieutenant in the hunt to be the first female jockey to win the Grand National.

Last year's Grand National was called off because of the Covid-19 pandemic, while this year's contest will be held without spectators.

Police are stepping up patrols around the meeting, with residents close to the Merseyside track warned not to gather in groups larger than six in their gardens during the races.

Tiger Roll will return to the scene of his biggest triumphs on Thursday - but in a different race at Aintree.

The 11-year-old runs in the Betway Bowl, where rivals will include Clan Des Obeaux and Native River.

It is the feature race on day one of the fixture, which culminates with Saturday's National.

Tiger Roll was withdrawn last month from the National, which he won in 2018 and 2019.

Owners Michael and Eddie O'Leary said they were unhappy with the weight the horse had been allocated. 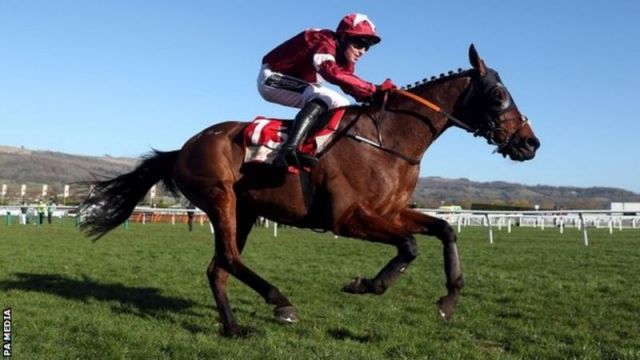 Tiger Roll became the first horse since Red Rum in the 1970s to win consecutive runnings of the Grand National when triumphing in 2019.

Currently trained by Denise Foster while Gordon Elliott serves a suspension, he recorded a fifth Cheltenham Festival victory in March.

Thursday's race is a three-mile contest with level weights, compared to the four-and-a-quarter miles of the National, which is a handicap where the 40 runners carry different weights.

Billaway, Cat Tiger and Dashing Perk are among the runners in the meeting's first race over the National fences as amateur jockeys tackle the Foxhunters Chase.

The race is being run in the name of former Aintree chairman Rose Paterson, who took her own life last year.