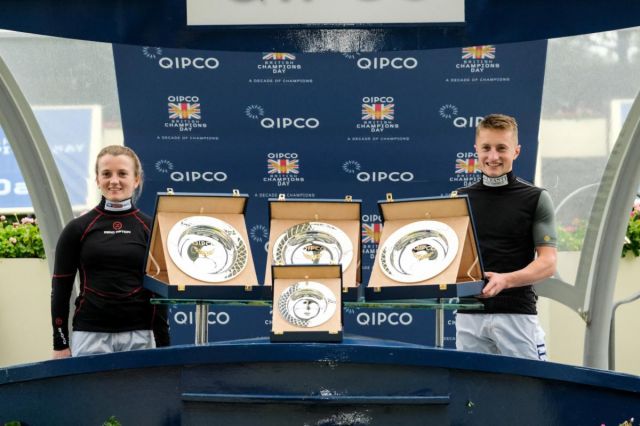 In almost symmetrical fashion, her boyfriend Tom Marquand then went on to ride the last two winners of the day, taking the G1 QIPCO Champion Stakes on Addeybb and the concluding Balmoral Handicap on Njord.

Having won two thirds of the races at Ascot between them plus two second places for Hollie Doyle, the couple have earned just upwards of £60,000 between them today and around £1.5 million for connections of the four horses.

Not a bad day at the office one might say.

With no Flat racing taking place in the UK tomorrow, the couple will have Sunday to celebrate before both return to action on Monday.

Speaking together after the last race, today's success had certainly not gone to their heads with Hollie reflecting:

"We live a pretty normal lifestyle outside racing, which probably surprises everyone."

Tom concluded the day by saying: "I have booked a place up the road for us for dinner tonight - I hope it's alright!"

"Once again, QIPCO British Champions Day has served up another afternoon of sensational racing and unforgettable stories.

"To see Hollie Doyle land the first two races and come out as the leading jockey for the day with her two seconds as well was amazing, especially after her record-breaking week. And then for her partner Tom Marquand to land the final two races on the card, including the UK's richest race in the QIPCO Champion Stakes, was brilliant.

"It really couldn't have happened to a nicer pair of people and they are both absolutely brilliant for racing. It was also great to see The Revenant go one better for France this year and continue the country's rich history of success at the meeting and for David Menuisier to land the Ascot winner that had eluded him.

"We would like to thank everyone who has supported the day and all the jockeys, trainers and owners for bringing their horses and creating such a memorable day."