Different Ways You Can Bet at Cheltenham in 2021

Different Ways You Can Bet at Cheltenham in 2021

This year’s Cheltenham Races kick off on the 16th March.

With the race only around the corner, we’ve taken a look at ways punters can bet. We also mention the best types of bet to choose from.

An Introduction to Different Types of Bets

The most basic bets you can place are known as single and double bets.

Single bets are the most common. These are where someone places a bet on a single event, then potentially achieves a straight win as a result.

There’s also double bets which are similar to single bets, except there are two possible outcomes over different events. Both must win in order to guarantee a return for a player.

The next types of bets are known as ‘trebles’ and ‘accumulators’.

A treble bet is where a single bet is placed on three separate outcomes on three individual events. In order for the player to gain a return, all selections must win.

An accumulator bet works in a different way.

Only one bet is placed, but four different selections are made. Again, they must all win in order to gain a return for the player.

There’s also a Yankee bet which is more complicated.

In this bet, a customer makes four or more selections and 11 bets in total. These are made up of 6 doubles, 4 trebles and a fourfold.

To get a return, at least two selections must win. 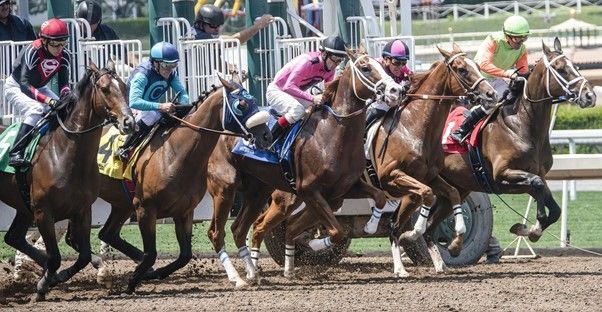 In addition to the more basic bets discussed above, more complex or ‘exotic’ bets also exist. These tend to be split into two different categories: horizontal bets and vertical bets.

Players can choose from either race-to-race parlays which are between two and six races long. They can also predict the precise order of finish for a single race in various different combinations.

It’s necessary to choose the winner of various races before the series of races actually start with horizontal exotic bets. The prize depends on the number of races won.

If two races in a row are won, this is referred to as a ‘daily double’.

Different combinations can also be made on horizontal bets. Or more than one wager can be made on an individual bet.

With something like a daily double, where winners of two consecutive races are chosen, completely different positions are determined.

A Pick 3 bet is similar to a three-race parlay. Choices are made over three different races before the first race commences.

While parlay rules are similar to standard parlays, there are some crucial differences to be aware of. Regardless of the wager placed on a sportsbook or track, a pick 3 bet can still be placed, despite technically being a parlay.

This is different from conventional sports, where a minimum amount is bet on each aspect of a parlay. With horse racing, pick 3 parlays can be placed, but they count as one bet.

This is different from conventional sports because wagers have to be placed on each separate part of the parlay. For example, a three-legged parlay with a minimum bet of $1 would cost $3 in total.

With horse racing, different payouts can be achieved, depending on the separate odds of horses. In other words, choosing a pick 3 with each race won by a longshot winner would be more profitable than choosing three straight favourites.

Pick five works when a player chooses three options from a three-race parlay or five from a five-race parlay. Each combination costs the same.

If a $1 bet is placed, with the number one chosen on each leg, the total cost would be $1. The winner must win each consecutive race before the first leg run ends and each combination costs the same.

Regardless of how you bet at Cheltenham this year, be sure to bet using these promos.

Bets to Try at Cheltenham this Year

Cheltenham is nearly here, and there are lots of different types of bets you might want to try this year.

If you’re an absolute beginner, a single or double bet is a great starting point.

Whereas for those more experienced in betting, they might want to try a treble, accumulator or even a Yankee bet. These make use of greater selections for a potentially higher win.

There are also vertical and horizontal exotic bets that can include bets for multiple races or just the order of finish for one race. In particular, horizontal bets allow players to win more, as they are based on the number of races won, or different combinations of wagers.

Some of the most common are pick 3 or pick 5 parlays, where a player makes one bet based on many different outcomes.