The prestigious handicap chase takes place over an extended two and a half miles on the New Course at Cheltenham on the second day of The International, Saturday, 12 December, and has a total prize fund of £105,000.

Coole Cody, a winner over hurdles at Cheltenham in 2017 for Michael Blake, has been revitalised since transferring to trainer Evan Williams earlier this year.

The nine-year-old has won two of his four starts for the Llancarfan handler and his victory in the G3 Paddy Power Gold Cup on 14 November is by far his biggest success to date.

Williams said: “Coole Cody has come out of the Paddy Power in great form. We have been really pleased with him and everything seems to be grand.

“The Paddy Power Gold Cup win was just fantastic. It is seldom that plans like that come together and it was just a really special day.

“It really was wonderful and we were over the moon to have a big winner at Cheltenham.

“The Paddy Power is one of the most prestigious races in the calendar and it meant a lot to us.

“At the moment, anything is possible with Coole Cody. We have put in an entry for the Caspian Caviar Gold Cup and, while nothing is set in stone, it is great prize money.

“The Caspian Caviar is run on the other course at Cheltenham, which is another thing to consider.

“I am not going to commit to the race at the moment, but we have made the entry and we will see how he is in the next couple of weeks.” 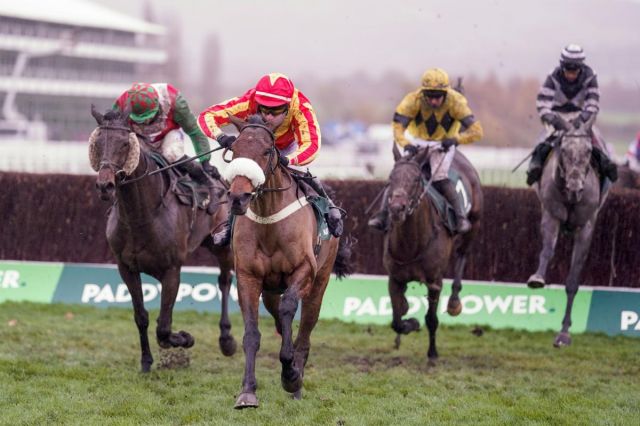 Paul Nicholls is the most successful trainer in the history of the Caspian Caviar Gold Cup with five wins, the latest of those successes coming with top class performer Frodon (2016 & 2018). Nicholls’ five contenders are headed by the classy Master Tommytucker, who had Good Boy Bobby (Nigel Twiston-Davies) 15 lengths in behind when sauntering to victory in a graduation chase at Haydock Park on 21 November.

Fellow Nicholls inmate Saint Sonnet was a leading fancy for the Paddy Power Gold Cup but was beaten when falling at the last.

The Nicholls quintet is completed by Modus, Grand Sancy and Southfield Stone.

Mengli Khan, a recent recruit to Seven Barrows having won a G1 in Ireland for Gordon Elliott, is also engaged.

Chatham Street Lad (Michael Winters) is the sole Irish-trained contender and was in winning action on his latest start in a handicap chase at Cork on 22 November.

Weights for the Caspian Caviar Gold Cup will be announced on Wednesday, 2 December.

Cheltenham Racecourse is situated in Prestbury on the northern outskirts of the historic spa town of Cheltenham. The Home of Jump Racing, Cheltenham Racecourse is the venue for the world's pre-eminent Jump meeting. The Festival™, which happens in March over four days every year, next takes place from Tuesday, 16 March, to Friday, 19 March 2021 inclusive and you can be the first to hear when tickets go on sale by registering your interest online at cheltenham.co.uk. Set against the beautiful backdrop of the Cotswolds, Cheltenham Racecourse is a stunning natural arena and offers the highest-quality action throughout the Jump season.