The Betway Queen Mother Champion Chase is the championship contest for two-mile chasers and has attracted 31 entries, including previous winners Altior (Nicky Henderson), successful in 2018 and 2019, plus 2020 scorer Politologue (Paul Nicholls).

Politologue began his season with the fourth G1 success of his career in the Betfair Tingle Creek Chase at Sandown Park in December while Altior endured just his second defeat in 17 chase starts when runner-up to Nube Negra (Dan Skelton) in the G2 Ladbrokes Desert Orchid Chase at Kempton Park on 27 December.

Trainer Paul Nicholls and Nicky Henderson are jointly the most successful trainers of all time in the Betway Queen Mother Champion Chase, alongside the late Tom Dreaper, with six winners each. Henderson has also made an entry for G2 scorer Janika, while Nicholls’ other potential starters include Duc des Genievres, Greaneteen and Magic Saint. 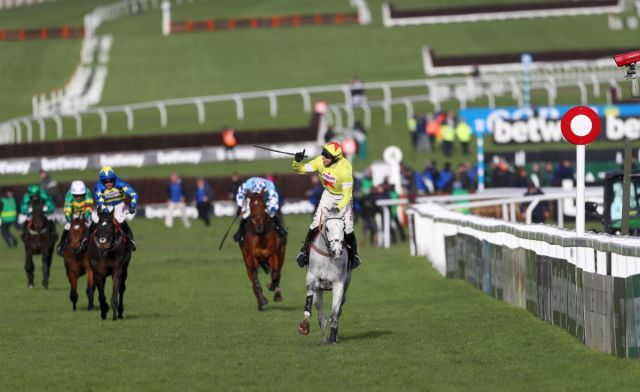 Politologue on his way to victory in 2020

Heading the market at 5/4 with sponsor Betway is Chacun Pour Soi (Willie Mullins), one of 14 Irish-trained entries. Nine-year-old Chacun Pour Soi has yet to start at Cheltenham, having missed this contest last season due to a last-minute injury. He has however looked imperious on his two starts so far this season, most recently cruising to victory in the G1 Paddy's Rewards Club Chase at Leopardstown on 27 December.

Third behind Chacun Pour Soi at Leopardstown was Put The Kettle On (Henry de Bromhead).The seven-year-old mare boasts a formidable record at Cheltenham, having won all three of her starts at the Home of Jump Racing. At The Festival™ in 2020, she landed the G1 Arkle Novices’ Chase and began the 2020/21 campaign with success in the G2 Shloer Chase at The November Meeting.

Another Irish entry to have already tasted success at Cheltenham this season is Chatham Street Lad (Michael Winters), who was most impressive when taking the G3 Caspian Caviar Gold Cup by 15 lengths on December 12.

First Flow (Kim Bailey) has won six of his 10 starts over fences, including his last five starts. Most recently, he defied a big weight to capture the Castleford Handicap Chase at Wetherby on 27 December.

Gloucestershire-based Bailey is considering options for the nine-year-old and remarked:

“First Flow is a horse that needs heavy ground, and he was very brave when winning at Wetherby over the Festive period.

“The Champion Chase is something we would think about, but the ground is going to be an important factor for him.

“He could run in the Clarence House Chase at Ascot later this month."

Betway PR Manager Chad Yeomans said: “It’s fantastic to see lots of entries for the Betway Queen Mother Champion Chase and as it stands, Chacun Pour Soi is the one they have to beat and is the 5/4 favourite with us. His jumping is one of his main assets and you couldn’t help but be impressed with him at Leopardstown over Christmas.

“Reigning Champion Politologue is going to be a tough nut to crack, though. He goes to Ascot to face Defi Du Seuil in a few weeks’ time, so the betting may change complexion again before too long. Throw in Altior and the new kid on the block Nube Negra, the Betway Queen Mother Champion Chase could be the most exciting of the Championship races at Cheltenham!”

There are 50 entries, the highest number since 2008, for the Ryanair Chase, which takes place over the intermediate distance of an extended two and a half miles.

In 2020 it was Min (Willie Mullins) who came out in front and he is one of 23 Irish-trained entries in 2021. The 10-year-old recorded the seventh G1 success of his career when making a winning seasonal return in the John Durkan Memorial Chase at Punchestown in December, when he accounted for stablemates Tornado Flyer and Melon, and heads the market with most bookmakers. If successful again in 2021, Min would become just the second dual winner of the Ryanair Chase after Albertas Run, successful in 2010 and 2011.

Also engaged again this year are last year’s neck runner-up Saint Calvados (Harry Whittington), fourth to Frodon on his return to action in the G1 Ladbrokes King George VI Chase at Kempton Park on Boxing Day, and the third home from 2020 A Plus Tard (Henry de Bromhead), who landed the G1 Savills Chase at Leopardstown over the Festive period. 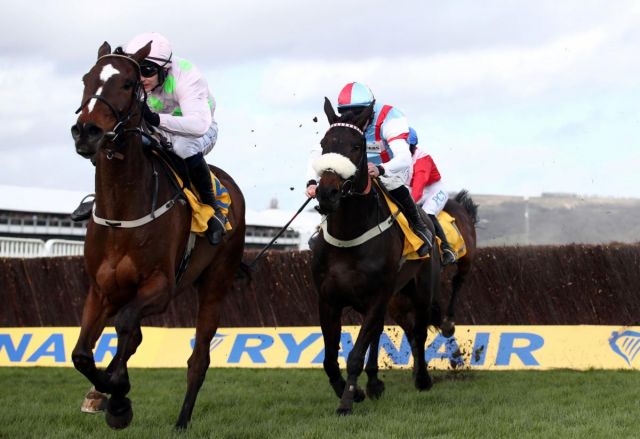 Vying with Min for favouritism at this stage is Imperial Aura (Kim Bailey). The eight-year-old is already a winner at The Festival™, having landed the Listed Northern Trust Company Novices' Handicap Chase over two and a half miles in 2020. He has picked up where he left off so far this season, beginning his campaign with victory in the Listed Colin Parker Intermediate Chase at Carlisle on 1 November and following up with a five-length victory in the G2 Chanelle Pharma 1965 Chase at Ascot 20 days’ later.

Bailey commented: “Imperial Aura is in good form and he runs on Saturday in the Silviniaco Conti Chase at Kempton.

“That race is essentially his prep run for the Cheltenham Festival where he will hopefully line up in the Ryanair Chase.

“He won at the Festival last year and I have been delighted with his performances so far this year.

“I am very happy with him and Saturday should hopefully tell us more, but Cheltenham is definitely a target for him.”

23 Irish-trained The Festival™ presented by Magners 2021

Cheltenham Racecourse is situated in Prestbury on the northern outskirts of the historic spa town of Cheltenham. The Home of Jump Racing, Cheltenham Racecourse is the venue for the world's pre-eminent Jump meeting. The Festival™, which happens in March over four days every year, next takes place from Tuesday, 16 March, to Friday, 19 March 2021 inclusive and you can be the first to hear when tickets go on sale by registering your interest online at cheltenham.co.uk. Set against the beautiful backdrop of the Cotswolds, Cheltenham Racecourse is a stunning natural arena and offers the highest-quality action throughout the Jump season. More information is available at www.cheltenham.co.uk and through: Twitter @CheltenhamRaces Facebook www.facebook.com/thehomeofjumpracing Instagram @cheltenhamraces

Cheltenham is part of The Jockey Club which stages thrilling sporting occasions including The Randox Health Grand National, The Festival™ and The Derby. Millions of people every year enjoy the special experiences The Jockey Club offers through racing, music, food and entertainment. Governed by Royal Charter, every penny made goes back into British Racing to help the sport thrive. The Jockey Club was founded in 1750 and today is the largest commercial group in Britain's second-biggest spectator sport, operating 15 racecourses nationwide, The National Stud, Jockey Club Estates, Jockey Club Catering, Jockey Club Live and the charity, Racing Welfare. For more information, visit www.thejockeyclub.co.uk