The two most recent of Henderson’s winners are entered once again – last season’s hero Epatante and Buveur d’Air, who was successful in 2017 and 2018.

Lambourn-based Henderson is responsible for six of the 27 entries in total, more than any other handler in 2021, with his sextet also including Buzz, Call Me Lord, Marie’s Rock and Verdana Blue.

Epatante, the 9/4 favourite with Unibet, became the fifth mare to win the Unibet Champion Hurdle in 2020 and began her season well with victory in the G1 Betfair Fighting Fifth Hurdle on 28 November, defeating Sceau Royal (Alan King) and Ribble Valley (Nicky Richards).

The seven-year-old suffered a reversal last time out however when runner-up to Silver Streak (Evan Williams) in the G1 Ladbrokes Christmas Hurdle at Kempton Park on Boxing Day.

Buveur d’Air, now a 10-year-old, has been off the track since sustaining an injury in the 2019 Fighting Fifth Hurdle, with Henderson mentioning the Listed Virgin Bet Contenders Hurdle at Sandown Park on 6 February as a possible comeback race.

Both horses are owned by J P McManus, the most successful owner ever in the Unibet Champion Hurdle with an amazing nine wins. 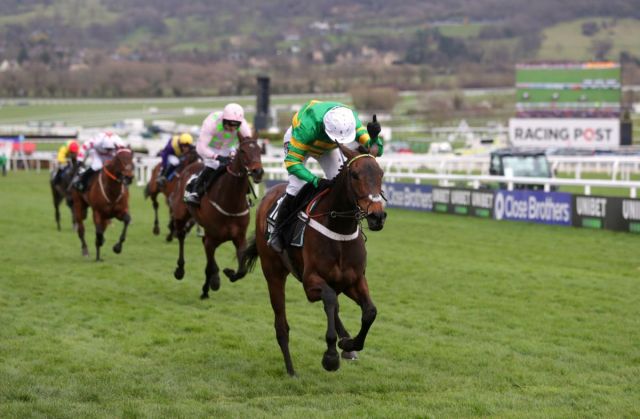 Epatante leads the way home in 2020

Tom Symonds was once assistant trainer to Henderson but is now flying high as a trainer in his own right.

His entry is Song For Someone, who has impressively won his last three starts, all of which have come in G2 company.

After finishing the 2019/20 campaign with victory in the rearranged Betway Kingwell Hurdle at Kempton in February, the six-year-old began this season with success in the Coral Hurdle at Ascot in November before recording his first Cheltenham victory in the Unibet International Hurdle on 12 December, when he prevailed by a nose from Silver Streak.

“I am absolutely thrilled with him at home. He is very well and seems to have come out of the International in great form.

“There are three races we are currently weighing up with one of them acting as his prep before one of the big spring festivals.

“He could go to Haydock for The New One Unibet Hurdle a week on Saturday, the Contenders Hurdle at Sandown Park or the Kingwell at Wincanton.

“I think the weather will play a big part as to what race he actually runs in and I am not really leaning to any of them at the moment. We will enter him in the three races as they come along and then decide where to go.

“I was absolutely delighted with his win at Cheltenham and despite the circumstances, it was great to see him prove his liking of the track.

“It was obviously nobody’s fault that they didn’t jump the hurdles in the home straight, but that would not have suited him as he is such a good jumper.

“The fact he still managed to win was great and it clearly showed that Cheltenham suits him. “The Champion Hurdle is firmly in the picture and it would be great to have a runner in a championship race like that.

“It is great to have a horse like him.”

The Unibet Champion Hurdle has been won by Irish-trained horses on 23 occasions and there are 12 Irish-trained contenders for 2021.

The pick of them at this stage looks to be Sharjah (Willie Mullins), who was the three-length runner-up behind Epatante in 2020 and recently confirmed his wellbeing with a comfortable victory over Aspire Tower (Henry de Bromhead) and Petit Mouchoir (Gordon Elliott) in the G1 Matheson Hurdle at Leopardstown on 29 December.

Mullins’ five entries also include Saint Roi, comfortable winner of the G3 Randox Health County Hurdle at The Festival™ in 2020 but a disappointing fourth behind Sharjah last time out at Leopardstown.

Other leading Irish-trained contenders include Abacadabras (Gordon Elliott), winner of the G1 Unibet Morgiana Hurdle at Punchestown in November, and the mare Honeysuckle (Henry de Bromhead), a five-time G1 winner including in the Close Brothers Mares' Hurdle at The Festival™ last season.

Formerly a smart performer both on the Flat for Michael Bell and over hurdles for Harry Fry in the UK, the seven-year-old won two G1 contests at Saratoga, USA, in the summer of 2019 for US Hall of Fame trainer Jonathan Sheppard, earning an Eclipse Award.

Following Sheppard’s retirement at the start of this year, Winston C is now in the care of Sheppard’s former assistant Keri Brion and part of her six-strong team based at Baltimore Stable in Enniscorthy, County Wexford.

His intended European debut will be at Navan in a Grade B handicap hurdle on 23 January. Ed Nicholson, Head of Unibet Racing Communications and Sponsorship, said:

“We’re delighted with the quality of entries for the 2021 Unibet Champion Hurdle.

“Two previous Unibet Champion Hurdle winners are entered in Epatante and Buveur d’Air, as well as the winners of three of our ‘20/21 Road to Cheltenham sponsored contests in Sceau Royal (Unibet Elite Hurdle), Song For Someone (Unibet International Hurdle) and Abacadabras (Unibet Morgiana Hurdle).”

16/1 Abacadabras, Concertista, Song For Someone;

There is a scratchings deadline for the Unibet Champion Hurdle on 9 February, with the six-day confirmation stage and supplementary entry stage following on 10 March.

Entries for the other two G1 championship hurdle races at The Festival™ - the Paddy Power Stayers’ Hurdle and the Close Brothers Mares’ Hurdle – will be revealed tomorrow, Thursday, 14 January.

The Festival™ presented by Magners 2021

Cheltenham Racecourse is situated in Prestbury on the northern outskirts of the historic spa town of Cheltenham. The Home of Jump Racing, Cheltenham Racecourse is the venue for the world's pre-eminent Jump meeting. The Festival™, which happens in March over four days every year, next takes place from Tuesday, 16 March, to Friday, 19 March 2021 inclusive and you can be the first to hear when tickets go on sale by registering your interest online at cheltenham.co.uk. Set against the beautiful backdrop of the Cotswolds, Cheltenham Racecourse is a stunning natural arena and offers the highest-quality action throughout the Jump season. More information is available at www.cheltenham.co.uk and through: Twitter @CheltenhamRaces Facebook www.facebook.com/thehomeofjumpracing Instagram @cheltenhamraces

Cheltenham is part of The Jockey Club which stages thrilling sporting occasions including The Randox Health Grand National, The Festival™ and The Derby. Millions of people every year enjoy the special experiences The Jockey Club offers through racing, music, food and entertainment. Governed by Royal Charter, every penny made goes back into British Racing to help the sport thrive. The Jockey Club was founded in 1750 and today is the largest commercial group in Britain's second-biggest spectator sport, operating 15 racecourses nationwide, The National Stud, Jockey Club Estates, Jockey Club Catering, Jockey Club Live and the charity, Racing Welfare.