The impressive Newbury and Kelso winner, trained in Gloucestershire by Jonjo O'Neill, is as low as 4-1 for the big race on 10 April.

Victory would be a record fourth triumph in the contest for owner Trevor Hemmings.

"It's a lovely privileged position to be on the favourite for the Grand National," said Scudamore, 38.

All the Grand National entries

A total of 77 horses remain after the latest National entry stage, with French pair Easysland and Ajas the main absentees.

A maximum of 40 runners can line up on the day, with the lowest-rated horses balloted out.

Cloth Cap was allocated 10st 5lb when the weights for the handicap were announced last month but the nine-year-old has since won at Kelso, and his National rating is 14lb lower than his current official mark.

"He's been a tremendous ride who's going from strength to strength and is a worthy favourite," said Scudamore, whose grandfather Michael landed the race in 1959 on Oxo.

"It's up to the bookmakers to decide what is a fair price and what isn't but I'm hoping that come that Saturday evening, he'll be looking like he was a massive price."

Cloth Cap is named after the headgear often sported by owner Trevor Hemmings, pictured at the races with Zara Tindall 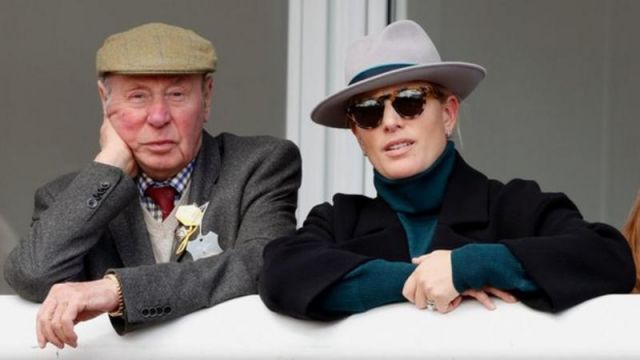 Cloth Cap is named after the headgear often sported by owner Trevor Hemmings, pictured here at the races with Zara Tindall

Hemmings, the owner of Preston North End FC, has previously won the National with Hedgehunter (2005), Ballabriggs (2011) and Many Clouds (2015).

Tiger Roll, the 4-1 favourite, was the shortest-priced winner for 100 years when claiming a second success in the last running two years ago.

With the two-time winner absent, Cloth Cap is the same odds for the National, which was cancelled last year and is set to be run without spectators this time because of the Covid-19 pandemic.

"He's in great form at home and the whole team is very excited," said AJ O'Neill, assistant trainer to his father.

"He's probably entitled to be favourite."

'We got our backsides tanned' at Cheltenham

Scudamore said the home side need to "pull their socks up" after Irish-trained runners won 23 races at last week's Cheltenham Festival, with just five for the Great Britain team.

"We well and truly had our backsides tanned and it's up to us to go out and change it," he said.

"Last week was a lesson to everybody that we have a lot of catching up to do it. It's deeds that matter and we've all got to pull our socks up."

Better prize money, race programming and owner investment have been cited as reasons for the Irish dominance.