Marquand then triumphed in the day's big race, the Champion Stakes, on the William Haggas-trained Addeybb (9-1).

He went on to take the concluding Balmoral Handicap with the Jessica Harrington-trained Njord (15-2) - just ahead of Doyle on Solid Stone.

All the Champions Day results

Fallon on Fallon Addeybb had finished runner-up last year behind Magical but this time the six-year-old stormed clear to get the better of Skalleti with Magical in third.

Like Addeybb, The Revenant went one better than 12 months ago with a game display to claim the Queen Elizabeth II Stakes for jockey Pierre-Charles Boudot and trainer Francis-Henri Graffard. 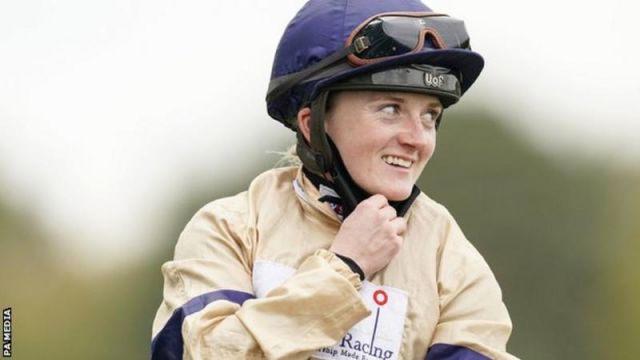 Her comfortable seven-and-a-half-length success on Trueshan, from the Alan King yard, was the first by a woman on Britain's richest race day - but she had a nervy wait before the Archie Watson-trained Glen Shiel was declared the winner after a battle with the 80-1 outsider Brando.

Glen Shiel was smartly out of the stalls and was joined three furlongs out by Oxted.

The July Cup winner took the lead but had nothing more to give in the final half-furlong and it was left to Brando to challenge to the line - but it was Glen Shiel and Doyle who were celebrating.

"I didn't think I'd won, so to have had the result we have was incredible," she added. "We had a good old battle with Oxted from the three-pole and I thought that I would be doing well to hold on like I did, but he is such a game horse.

"But it's not about me, it's about Archie Watson; he has campaigned this horse unbelievably. No one else would have won a Group One with this horse.

"My aim at the start of the year was to ride a Group winner and I always said a Group One one day, but I didn't think it would come this year."

The Group One victory sees her follow in the footsteps of female jockeys Alex Greaves, who dead-heated on Ya Malak in the Nunthorpe Stakes at York in 1997, and Hayley Turner, who won outright on Dream Ahead in Newmarket's July Cup in 2011.

After his victory, Marquand paid tribute to his girlfriend's achievements.

"Our first Royal Ascot winners were for him and he's had a cracking year.