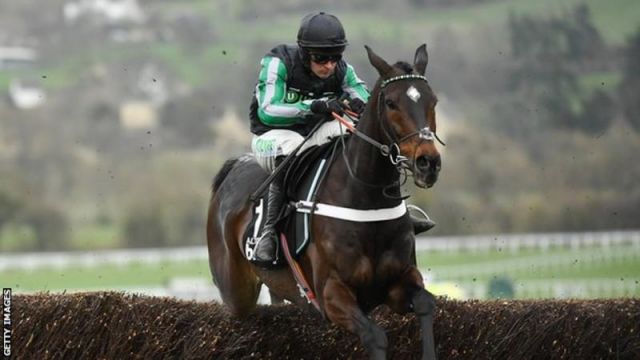 The 11-year-old won the Queen Mother Champion Chase at the Cheltenham Festival in both 2018 and 2019 during a 19-race unbeaten run which ended in November 2019.

"Altior has been a star and given us all some amazing days," Henderson said.

"It's been a great journey, but all good things must come to an end."

Among Altior's 21 career wins were 10 Grade One triumphs, and his remarkable unbeaten streak lasted more than four years.

He won at the Cheltenham Festival four years in a row, first claiming the Supreme Novices' Hurdle in 2016, then the Arkle Trophy in 2017 before going on to clinch back-to-back Champion Chase victories.

Trainer Henderson said it was "sad" the jumps great was "going into honorary retirement".

"His owners Christopher and Pat Pugh feel that now he is 11, turning 12, they would like him to retire while still at his peak - fit, sound and healthy and ready for a new career," Henderson said.

Altior is to spend retirement in the care of former jockey Mick Fitzgerald.

"He goes out unblemished and very nearly unbeaten," Henderson said.