The Polytrack contest over nine and a half furlongs is a Fast-Track Qualifier, with Sky Power now guaranteed a start in the feature 10-furlong Betway Easter Classic at Lingfield Park on All-Weather Championships Finals Day, Good Friday, April 2.

Sky Power was in share of ninth place at the top of the home straight and made good progress to move on to the tail of the leaders with a furlong remaining.

Fellow three-year-old Winter Reprise showed a great attitude when challenged on all sides and for a long way it looked that nobody would get by him, but he could not resist the thrusting challenge of Sky Power in the final 25 yards.

The margin of victory was a short neck, with Bugle Major (Pascal Bary/Vincent Cheminaud, 17/2) just a head further behind in a four-way finish for third.

The 5/2 favourite Romanciere (Andre Fabre/Maxime Guyon), third in the G1 Prix Jean Romanet on her penultimate start, held every chance in the straight, eventually fading close home to finish seventh.

Sky Power, a son of Stormy River, has now won two of his four starts on the All-Weather. Barbedette said:

“Stephane [Pasquier] gave me a fright - he is very calm and I tend to get very nervous! What a race, what a ride - bravo Stephane!

“I would like to thank Mr and Mrs Roy, the owners [Roy Racing Ltd], for their trust.

It is a super result. “It was stressful to watch, he was in between horses and it wasn't easy to see him coming up between them to get his head in front.”

Pasquier said: “I know the horse by heart, he has a capacity to accelerate that is not common in horses, and he showed that today.

“When he relaxes as he did here, he is able to win the big races. I am very happy. A thought for the owners, and for all the owners that can't be here also.” 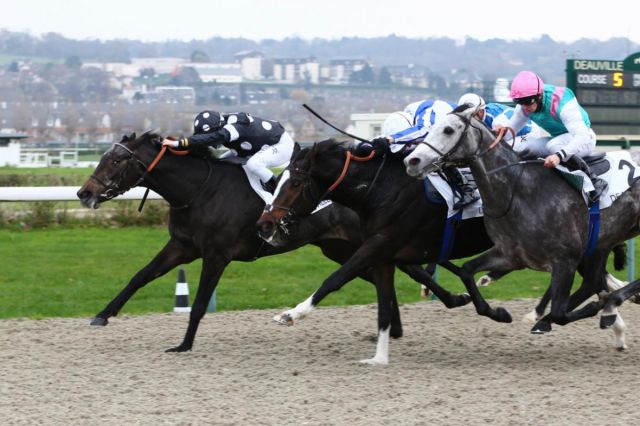 For details of the 24 Fast-Track Qualifiers, please click here: https://www.awchampionships.co.uk/take-part/fast-track-qualifier-dates/