All eyes will be on Bangkok and Forest Of Dean as they clash for a third time this season in the feature Betway Easter Classic (4.15pm) at Lingfield Park on All-Weather Championships Finals Day, Good Friday, April 2.

On their most recent encounter in the Listed Betway Winter Derby Trial at Lingfield Park on February 6, Bangkok quickened best to beat Felix by a half-length with a neck back to Forest Of Dean in third. Bangkok skipped the G3 Betway Winter Derby three weeks later in favour of a tilt at the Saudi Cup, leaving Forest Of Dean to reverse the placings with Felix and provide trainer John Gosden with a third consecutive victory in the 10-furlong highlight.

Bangkok (Andrew Balding/Silvestre de Sousa), who is the course record holder over 10 furlongs at Lingfield Park, is the 6/5 favourite with Betway. Forest Of Dean (James Doyle) is next in at 7/4. 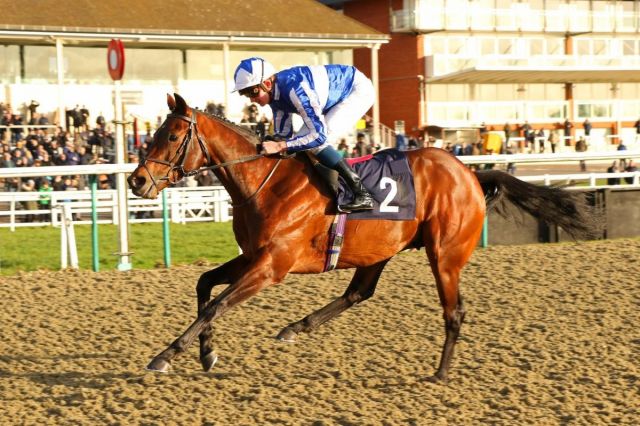 Bangkok setting a course record of 2m 0.54s in the 2020 Betway Winter Derby Trial Ed Walker and Brian Meehan are hoping to cause upsets with Assimilation (Luke Morris) and Palavecino (Martin Dwyer).

Walker said: “Assimilation is in cracking form. Whatever he lacks in ability, he makes up for in heart and determination.

“Six months ago, if you said to me that he would have a chance on Finals Day, I would have laughed at you. He just continues to surprise us with his progress through the ranks.

“He seems to be thriving and Luke Morris knows him inside out. He probably won’t be good enough but who knows? He always surprises us and is versatile tactically, which could be an asset in a race like this.”

Palavecino has run two good races over the course and distance this season.

The five-year-old was last seen out when fourth behind Sangarius in a strong edition of the Listed Betway Quebec Stakes in mid-December, a race in which Bangkok was second.

“Palavecino had a break over Christmas as he’d had a busy enough time of it up until then.

“It just seemed a good moment to give him some time off and he has come back really well. We have had an eye on the Easter Classic the whole time and his preparation has gone very smoothly.

“He is fresh, he is improving, and I would see him in there with a very solid chance.”

Mark Johnston won the most recent running of the Betway Easter Classic with Matterhorn in 2019.

The Middleham trainer is represented by Sky Defender, a G3 runner-up on turf who turns out quickly after finishing behind Global Giant in the Listed Magnolia Stakes at Kempton Park last weekend.

The seven runners are headed by Rainbow Dreamer (Alan King/Martin Harley) and Ranch Hand (Andrew Balding/James Doyle), both successful in Fast-Track Qualifiers on their latest starts.

A classy field has assembled for the Bombardier All-Weather Mile Championships (4.45pm, 10 runners).

Mums Tipple (Sean Levey) aims to continue Richard Hannon’s 100 per cent record in the race while Khuzaam (Roger Varian/Jack Mitchell) would be a poignant winner in the colours of the late Hamdan Al Maktoum.

The highly regarded Diligent Harry (Clive Cox/Adam Kirby) is another contender to note.

The four-year-old is aiming to give her owner Cheveley Park Stud a second win in the race following Diagnostic in 2018.

The seven-race programme is completed by the Bombardier All-Weather Championships Apprentice Handicap (5.15pm, 14 runners), in which 2019 All-Weather Mile champion Oh This Is Us (Richard Hannon) will be ridden by Luke Catton.