The mile Polytrack contest was a Fast-Track Qualifier and Solar Heights is now guaranteed a free start in the £150,000 Ladbrokes Fillies & Mares' All-Weather Championship over seven furlongs at Lingfield Park on Finals Day, Good Friday, April 10.

The 94-rated Solar Heights, trained by James Tate and ridden by PJ McDonald, had upwards of 7lb in hand over her four rivals on official ratings, having finished second under top weight in a class two fillies' handicap at Wolverhampton on January 27.

Sent off the 4/5 favourite, Solar Heights tracked front-running outsider Ruby Gates (John Buter/Dylan Hogan) for the first half of the race.

The leader tried to kick away rounding the home turn, but Solar Heights and the chasing pack were back within striking distance entering the straight. 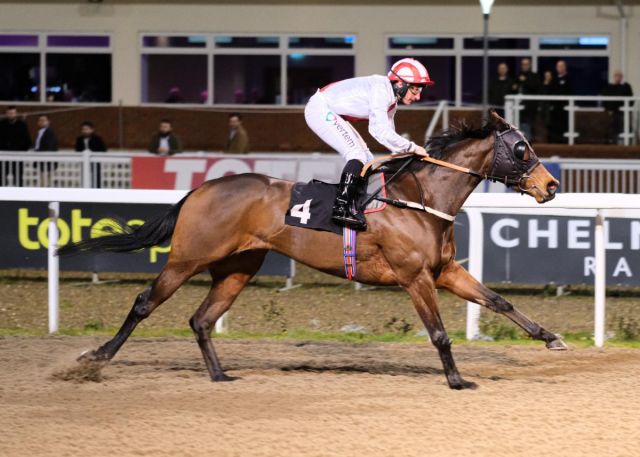 Solar Heights moved through to lead passing the furlong pole and readily saw off the challenge of second favourite Geizy Teizy (Marco Botti/Ben Curtis) on the run to the line.

The winning verdict was a comfortable two lengths, with a further half-length back to Exceed Loose (Marco Botti/David Probert) in third. Owned by Saeed Manana, Solar Heights was winning for the fourth time from six starts at Chelmsford City.

Tate said of the four-year-old:

"Solar Heights is off to the covering sheds now but there is a chance we could bring her back in foal for Finals Day. "I was pleased when I saw the entry stage for tonight. She was top rated, likes Chelmsford and has done it nicely. "The drop back to seven for the final does not worry me. I would rather drop back than go up to a mile and a quarter. The final is usually a fast-run race and she has a bit of early speed. "It is more of question of what calibre of opposition she will be taking on, so we will keep an eye on that, see how the covering goes and then think about the final. "No decision has been made about the stallion she will visit. We are still arguing about it!"

"That was pretty straightforward and Solar Heights was entitled to win like that on the figures. "Lingfield on the turn all the time should suit her because she does have early pace and I don't see the drop back to seven being a problem.

She has a bit of boot and does her best work early on. "The final will be a step up but it is great prize money and, with her rating, she is entitled to take her chance."