The Tapeta contest, run over an extended two miles, was a Fast-Track Qualifier and Rainbow Dreamer is now guaranteed a free start in the £150,000 Betway All-Weather Marathon Championship over two miles at Lingfield Park on Finals Day, Good Friday, April 10.

Trained by Alan King and ridden by Hollie Doyle, seven-year-old Rainbow Dreamer (100/30 second favourite) came in today's contest at the top of his game following handicap successes on Polytrack at Kempton Park on December 11 and January 4, both over two miles.

His other All-Weather success came in a handicap over an extended two miles on Fibresand at Southwell in February 2019, meaning he has won on all three All-Weather surfaces available in the UK. He is also a turf scorer on the Flat and over hurdles.

The opposition was led by G2 scorer Raymond Tusk (Richard Hannon/Richard Kingscote) and French challenger Funny Kid (Christophe Ferland/Maxime Guyon), winner of the Betway All-Weather Marathon Championship in 2018, after the pair were separated by a half-length in a Fast-Track Qualifier at Newcastle on December 14. Upon leaving the stalls, the 5/6 favourite Raymond Tusk was sent straight into the lead, whilst Funny Kid dropped in last of the five runners.

Rainbow Dreamer tracked the leader in second place on the outside.

The order remained unchanged until the tempo increased at the half-mile marker.

Rainbow Dreamer grabbed the lead soon after and, with Raymond Tusk unable to muster a response, quickly established a commanding lead rounding the home turn.

Funny Kid tried to close the deficit in the straight, but the bird had flown and Rainbow Dreamer galloped on strongly to score by three and a half lengths.

Deal A Dollar kept on for third, with Raymond Tusk a disappointing fourth.

Hollie Doyle said: "That was great. Rainbow Dreamer is going the right way and seems to love the All-Weather. "He went up 3lb for his win at Kempton the other week and has done it nicely again tonight. "It looked a bit of a tricky one to work out beforehand. I figured that Raymond Tusk had the stamina and the French horse had the speed. "The headwind down the back straight made it hard without cover, but I wanted to ride him like that and luckily when I pushed the button, the wind was blowing the right way." 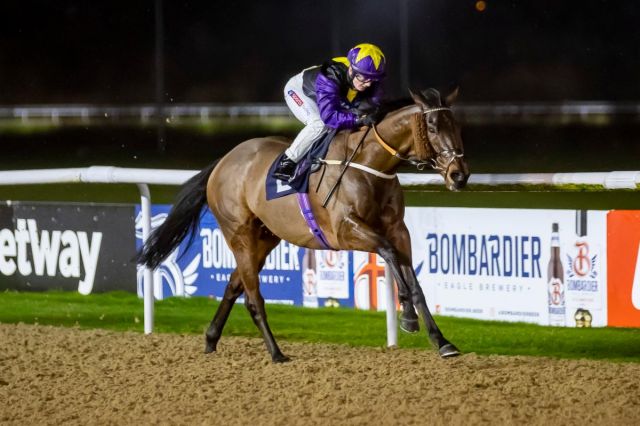 The season seven information pack can be downloaded by following this link and scrolling down to the bottom of the page: https://www.awchampionships.co.uk/about-the-championship/all-weather-explained/ The six championship categories are: