The mile contest was a Fast-Track Qualifier and Madame Tantzy is now guaranteed a start in the £150,000 MansionBet All-Weather Mile Championships on Finals Day.

Trained by Eve Johnson Houghton and owned by her mother Gaie, Madame Tantzy is a half-sister to fellow homebred Accidental Agent, who captured the G1 Queen Anne Stakes for connections in 2018.

The five-year-old was patiently ridden by Georgia Dobie as Lady Rockstar led the 10 runners before making eye-catching headway through the field approaching the final furlong.

She hit the front over half a furlong out and stayed on strongly to beat Misty Grey by a length and a half, with Caspian Queen a neck further back in third. The well-backed 7/4 favourite Kenzai Warrior was fifth.

Prior to tonight, Madame Tantzy was 12th on soft ground in a Listed race at Doncaster 18 days ago having taken mile handicaps at Goodwood and Newmarket earlier in the campaign.

Eve Johnson Houghton said: “This is huge! We wanted a bit of black type for this filly – she is obviously a half-sister to a Group 1 winner in Accidental Agent and out of a half-sister to Mohaather – and to get it is massive for her.

“She has improved all year and the fitting of blinkers has really helped. That said, I thought we might get placed but didn’t see her winning like that, and she really has done it well. I am so happy with her.

“I think the nice long straight here suits her and they went a great pace for her to aim at, which is very unusual for a Listed race.

“Georgia gave her a fantastic ride. She is a 3lb claimer, she wasn’t claiming tonight, and she just relaxed and let the filly do her stuff – I was so proud of her. She knows Madame Tantzy really well and knew how important it was for us to get black type. It was a beautiful ride.

“It is always nice to keep the mother happy! With this [horse’s] family, the wheel just keeps on turning, it is an amazing family. You have good winners in every generation – we are really lucky.”

Dobie, who was unable to use her 3lb claim, said: “Eve has given me some great rides this year.

“This filly was a big price but she had every right to be here. She has run in some hot races and last time the ground was too soft for her, which meant she went under the radar a little bit.

“She has done that lovely and has actually won cosily enough. She is a homebred by my boss’s mother and to get some black type is brilliant.” 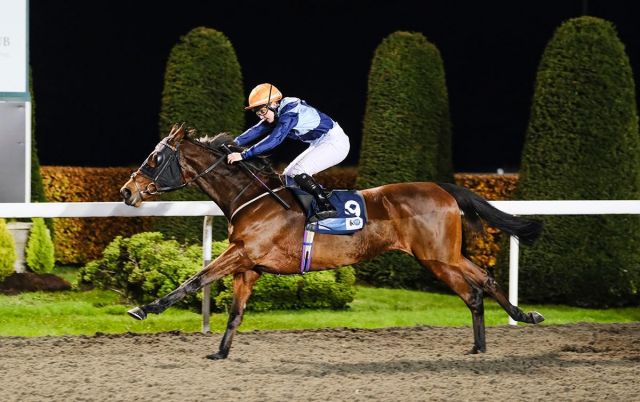 Finals Day will take place at Newcastle for the first time while its previous home Lingfield Park will now stage the All-Weather Vase fixture for horses not rated high enough to run on Finals Day.

There are two ways for horses to qualify for one of the finals on All-Weather Championships Finals Day at Newcastle:

* A horse can win a 'Fast-Track Qualifier' race which will ensure a FREE and GUARANTEED place in the corresponding final on Good Friday. There are four Fast-Track Qualifiers in each of the six championship categories hosted at racecourses in Great Britain, Ireland and France. If a filly wins any of the Fast-Track Qualifier races for either the Sprint or the Mile categories, the filly will be qualified for the final of that specific category, or for the Fillies and Mares Final.

For details of the 24 Fast-Track Qualifiers, please click here.