The two latest runnings of the Magners Cheltenham Gold Cup have gone to Al Boum Photo (Willie Mullins). The now nine-year-old, owned by Joe and Marie Donnelly, returned to action with a smooth success in the G3 Savills New Year’s Day Chase at Tramore on 1 January – the same contest he won prior to his victories in 2019 and 2020. If successful again in 2021, Al Boum Photo would become only the fourth horse to win the contest three times following Best Mate, Arkle and Cottage Rake (Golden Miller is the most successful horse ever in the contest with five victories). 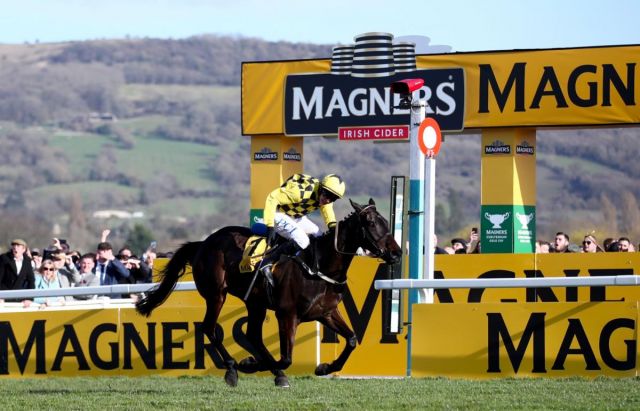 There are 17 Irish-trained entries overall, including recent G1 Savills Chase victor A Plus Tard (Henry de Bromhead) and his stablemate Minella Indo, runner-up to Champ (Nicky Henderson) in the G1 Festival Novices’ Chase last season before beginning this season with impressive victories at Wexford and Navan. He fell on his latest appearance in the Savills Chase.

Britain’s 11-time champion trainer Paul Nicholls is the most successful current trainer in the Magners Cheltenham Gold Cup with four wins and needs just one more victory to equal the record of the late Tom Dreaper. Nicholls’ four entries this time round are headed by Frodon, who landed the G1 Ladbrokes King George VI Chase at Kempton Park on Boxing Day under Bryony Frost. The eight-year-old boast a formidable record at the Home of Jump Racing with six victories, including the G1 Ryanair Chase at The Festival™ in 2019. Nicholls’ quartet also includes Cyrname, who impressed on his seasonal return when winning the G2 Charlie Hall Chase at Wetherby before disappointing when pulling up behind Frodon at Kempton Park.

Runner-up in the Ladbrokes King George VI Chase was Waiting Patiently (Ruth Jefferson), who was making his first racecourse appearance in over a year. He enjoyed his finest hour when taking the G1 Betfair Ascot Chase in 2018.

Jefferson, who is based in North Yorkshire, reported: “Waiting Patiently is very well at home and has come out of the King George absolutely bouncing. He has been doing handstands and was squealing yesterday morning because the lot was late going out!

“We have decided to enter him in all of the possible targets at the Cheltenham Festival just to keep our options open - at least for now. The Champion Chase, Ryanair Chase and the Gold Cup are all championship races and it just makes sense at this stage to keep him in all three.

“We still don’t know how far he will be dropped back down in trip so the Champion Chase comes into the equation and he has got an entry for that.

“The Ryanair Chase is obviously another race to consider, whilst the Gold Cup, given these uncertain times could be an interesting race.

“With so much going on, entering in all three races just keeps our options open and then we’re not tied down about having to go for one particular race.

“He will probably run again before Cheltenham, but where we go is something we are still discussing. The Ascot Chase was originally the race I had pencilled him in for, but I don’t know whether that will then be too close to Cheltenham and it therefore becomes difficult to run in both.

“With that in mind, I am not sure where we will go next at the moment, but I would like to get another run into him before Cheltenham. “Things are just very uncertain at the minute. We don’t know what the ground will be like come the spring so what race we go for at Cheltenham could be dictated by other factors.

“His run at Kempton was brilliant, but it didn’t surpass my expectations because I have always known that he is an exceptionally talented horse.

“The only time I got him wrong was when I ran him at Aintree in the Melling Chase. He was coming back from his second to Cyrname in the Ascot Chase and had mucus when we scoped him, but apart from that, he has always run his heart out and just been an absolute superstar for us and his King George run showed how talented he is.

“It was quite a fast King George, so with the Gold Cup in mind, will he stay the trip? He was finishing very strongly at the finish, so it is another thing to think about.

“His profile in Grade One races is so variable. He has run in Grade Ones over a variety of trips and has always run well. “Waiting Patiently has never been to Cheltenham. I guess for us in the past, it has not really been the be all and end all for him to run there, because he has had other options like Aintree.

“We have sometimes planned for Cheltenham and sometimes haven’t. We have always made the entries but for different reasons he has never ended up there.

“However, I have thrown caution to the wind this year with the entries and maybe this is the time where he does make it to the Cheltenham Festival.”

The neck runner-up to Al Boum Photo in 2020 was Santini, who is one of three entries for reigning champion trainer Nicky Henderson alongside Champ and Terrefort. Santini began the season when runner-up to Lake View Lad (Nick Alexander) in the G2 William Hill Many Clouds Chase at Aintree before going on to take fifth behind Frodon at Kempton Park. Others engaged include 2018 hero Native River (Colin Tizzard) and The Conditional (David Bridgwater). The Conditional won the G3 Ultima Handicap Chase at The Festival™ in 2020 and has run well on both his starts so far this season, including when third in the G3 Ladbrokes Trophy at Newbury in November.

Bridgwater went close to Cheltenham Gold Cup success previously with The Giant Bolster, who was runner-up to Synchronised in 2012 and also fourth in 2013 and third in 2014.

“The Cheltenham Gold Cup is a potential long-term target for The Conditional.

“His owner [Peter Cave] is an older gentleman who would love to have a runner in the race, and we all have dreams don’t we so we’ve made the entry and who knows, he may end up in the race in March.

“I guess one of the factors which could come into the mix is whether the Irish are allowed to come over? I mean you would have to say in the Gold Cup picture, the best form is with the Irish horses so that is something which will be interesting to see.

“The Conditional has come out of his last run at Ascot in good form. I think if it was a left-handed track, he would have won that day, but we have been really pleased with him since.

“The target for him is going to be the Cotswold Chase [Festival Trials Day at Cheltenham on 30 January]. That will give us an idea of where we stand with him and if maybe the Gold Cup is something to think about."

There is a scratchings deadline for the Magners Cheltenham Gold Cup on 9 February with the six-day confirmation and supplementary entry stage following on 13 March.

Revised order of running in 2021

Following the addition of a new race to The Festival™ in 2021, there is a slight change to the order of running.

The Boodles Juvenile Handicap Hurdle now moves to day one, Tuesday, 16 March due to the novices’ handicap chase no longer being run.

A full order of running can be found below.

The Festival™ presented by Magners 2021

Cheltenham Racecourseituated in Prestbury on the northern outskirts of the historic spa town of Cheltenham. The Home of Jump Racing, Cheltenham Racecourse is the venue for the world's pre-eminent Jump meeting. The Festival™, which happens in March over four days every year, next takes place from Tuesday, 16 March, to Friday, 19 March 2021 inclusive and you can be the first to hear when tickets go on sale by registering your interest online at cheltenham.co.uk. Set against the beautiful backdrop of the Cotswolds, Cheltenham Racecourse is a stunning natural arena and offers the highest-quality action throughout the Jump season. More information is available at www.cheltenham.co.uk and through: Twitter @CheltenhamRaces Facebook www.facebook.com/thehomeofjumpracing Instagram @cheltenhamraces

Cheltenham is part of The Jockey Club which stages thrilling sporting occasions including The Randox Health Grand National, The Festival™ and The Derby. Millions of people every year enjoy the special experiences The Jockey Club offers through racing, music, food and entertainment. Governed by Royal Charter, every penny made goes back into British Racing to help the sport thrive. The Jockey Club was founded in 1750 and today is the largest commercial group in Britain's second-biggest spectator sport, operating 15 racecourses nationwide, The National Stud, Jockey Club Estates, Jockey Club Catering, Jockey Club Live and the charity, Racing Welfare. For more information, visit www.thejockeyclub.co.uk